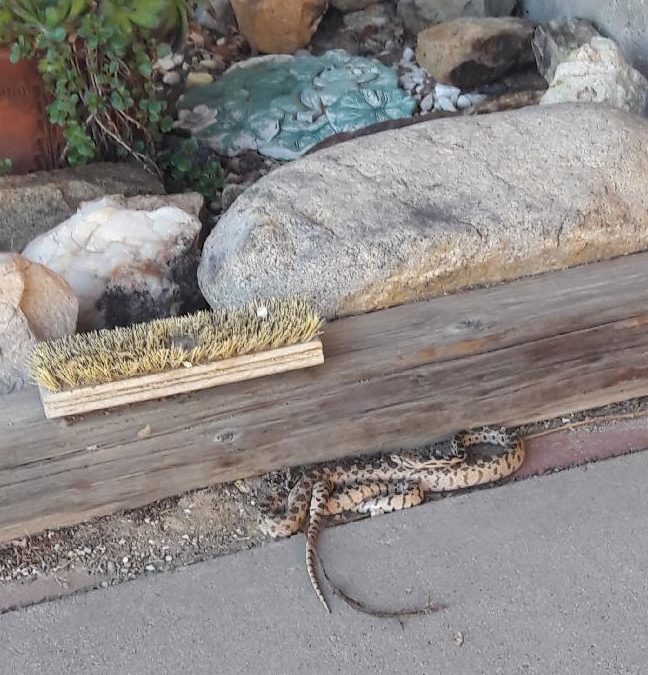 We found a gopher snake, motionless in the street by our driveway.  My husband Martin carried him reverently to the hill, far from concrete and cars.

The next evening, we walked with the dog to the snake’s resting place and found no snake.  Our neighbors joined us with their dog and told us of their fear of snakes which was so extreme that they had taken a different path to avoid the one by their back gate.

Martin reported carrying the probably dead snake from our house to the desert – an act of kindness they found difficult to fathom because of their fear.   Chris told Christina and the children it was the ghost snake which had made them afraid to go back through the side gate.  Martin laughed that he moved such a snake from the welcome mat of his workshop earlier that day.  I had seen it slither away from where I’d started to water its periwinkle cave, not realizing the disruption I’d caused.

Questions arise in my mind.  “Do ghost snakes get blown about in the wind?”  Answers too.

If they existed, ghost snakes could fly, but not of their own volition.  For that, they must become birds – like the birds that Chris finds who have flown into their window – one a week, he claims, and wind up in the beaks of the waiting hawk who sits on the hot tub anticipating Chris hearing the bang of bird head on glass and waits for him to toss the feathers and bones without the inner bird up into the air for him.

Do the flying ghost snakes collide in the wind with the spirits of hawk-devoured birds?  Dead birds navigate, no longer bothered by barriers like windows.

Martin says carrying the snake was a mystical experience for him.

The next evening, Diego Dog and I venture out alone and are particularly watchful of every step.  We find no one – no snakes, lizards, hawks.  They had all gone to bed, out of sight of the trail although traces remained of their paths in the sand.

Our snake friend was curled like a cat on the warm stones in front of our door.  His patterns of black and beige to brown could be woven on the bead loom, his little head, resting on his shoulders, his tail curled around so the main part of his body rested on it, was covered in tiny ants.  I wanted to brush them off but Martin said they would be nice snacks for him.  Oh little snake, how do you provoke such nurturing feelings in me when our neighbors run from you or try to kill you? I won’t put my face to yours the way I do with the bird but I recognize a common ancestry and I bow to you little snake.  Namaste, dear life form, crawling from stars and dirt and particles of patterns so mysterious I can’t place them.  You redefine my sense of beauty – like Coltrane at the end of a long improvisation when he escapes all composition rules into the chaos of before worlds and comes back into the weaving with beads in even patterns of brown, beige and black, blending into the uneven rocks and the white concrete of the driveway.

The snake died.  The stick his body curled around wasn’t a stick.  It was his own guts that the ants were crawling.  He managed to slither in the dark to the sun where I found him in the early morning, head turned up like Charlie Cat does when he’s fast asleep.  He looked so peaceful I thought he was simply taking in the rays.  We wouldn’t have let him suffer his night of dying had we known.

Leonard  died,  no connection and every connection to the snake.  I had written to our son Alonzo about our gopher snake, waiting for him on the doorstep to thank him for saving his bull snake cousin at Leonard’s home.  Alonzo quipped back that he didn’t need to wait and it turned out he couldn’t.

Ghost snakes floating in the music of mind in cottonwood trees are always singing – or are those birds?  A thousand unknown birds can’t replace the one that is known.