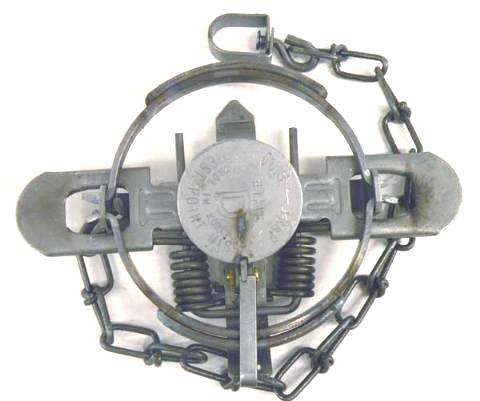 Told by child’s grandmother who was busy at work and could not take the time to tell all the details. Watch this space as effort will be made to contact her at a more convenient time.

Approximately 2011, my grandson stepped into a leghold trap while hiking with his family. Fortunately his father was able to remove the trap. The child was not injured thanks to his high top boots. This was in the Winnemucca Ranch Road area.

Reno Gazette Journal February 11, 2007: A steel trap snapped shut, pinching the folds of flesh on the retriever’s face. Owner Carol Grigus heard her pet’s yelps of pain and rushed to his side, horrified.

Carol Grigus’ outrage led to further organization and growth of TrailSafe Nevada. She is another co-founder. Here is her initial letter to the editor of Reno Gazette Journal:

I’ve been hiking the Galena Park area of trails for 15+ years, (I live across the highway from the Galena park) and have never come across any of these….I was taking a side trail West to the Jones Creek loop trail; stopped there and then turned around and came down…A short hike that I have done hundreds of times before, but lost the trail on the way down and had to ‘bushwack’ my way back down.. that’s when Duke got into trouble..He was with me the whole way, except when he must have smelled some bait….O gosh, I hope the bait wasn’t poisoned!!…….!  The Ranger wasn’t sure that this trap was in the park or not..

Before the ranger  came, I managed to untie the wire that fastened the trap to the tree there and we were able to walk with the trap on Duke’s neck…Later, the ranger arrived, released the trap and so we walked to my car together…Not 50′ from that trap I spotted another one….(the playing card attached to a wire above the trap) and showed her. However, we didn’t stop to inspect that one…Didn’t see any animal there….both traps were on a ridge of Jones Creek not more than an eighth mile west of Mt. Rose highway just north of the “north” Galena Park entrance…

Please tell me what can be done to avoid this “incompatible” use for such an area….OUTRAGEOUS that we even have to worry ourselves with this possibility in this location!!!!!!!

My children used to play hide and seek in this same area while growing up here…..with adults watching them!!!!!!!!!

My dog recently stepped in a trap while we were out hiking in the desert less than one-half mile from my house. The trap was set in an area bordering a road frequently traveled by equestrians,  while their dogs run off leash.  Unfortunately,  the trap he stepped in, and the trap next to it, did not have any identification on them.  I find this absolutely unacceptable.  First that someone would set traps so close to residences, and then that I am unable to hold the person accountable.

Trap registration allows Department of Wildlife Game Wardens to do their jobs. How can trap law be enforced unless violators can be identified?

Please make my comments part of the public record,  as I am unable to attend the legislative session tomorrow.

Thank you for your consideration. Debbie Tayler, April 6, 2015

Dog Gives Birth While Trapped – She and Pups Survive

Government trapper rescues injured dog and her pups
By Kay Jenney
A government trapper saved the life of a dog and her seven puppies after the mother dog had chewed off her foot to get out of a trap near Bishop, CA.
Wildlife Service Specialist Frank Homan was on the job near the Fish Lake area between Bishop and Tonopah when he discovered the injured animal. He spent three days winning her trust, feeding and giving her water.
“l came back home to Yerington and just got to feeling sorry for her, so I went back and got her,’  said Homan.
The crippled dog was starving and a half-mile from water, Homan said. But even though she was in such a bad condition, she was still nursing and caring for her seven puppies, he said.
“This was in November when it was really cold,” Homan added.
Shelly Dillwith, owner of Mrs. Pickles’ Home Pet Care Service, took the dogs in almost a month ago and has been caring for the mother and pups since then.
The adult dog is a mix of Aussie and McNab. The pups also are mixed with Border Collie. Dillwith suggested the injured dog was a cow dog, possibly lost by cattle herders passing through the area.
And she said the-real heroes of this story are Homan and veterinarian Lisa Infantino.
“It’s Homan’s job to keep the ecosystem in check by trapping coyotes, but he has a heart”,  Dillwith said.
“He drove many hours on a Sunday, hauling a horse trailer, to bring the canine family back to Yerington. Then, Infantino opened her clinic and treated the injured mother dog, on Sunday. without charge,” said Dillwith.
The dog has been named ,”Amazing Grace” by Dillwith. The courage of this dog to survive was just amazing, Dillwith said enthusiastically.
Infantino provided a timeline of the dog’s suffering to Dillwith from examining her injuries and condition.
Apparently, she was first caught in the trap; chewed her foot off; gave birth; then suffered hunger, thirst and medical complications. The dog was crippled and stranded with her litter. Homan said the area
is the most desolate country you can find.
Dillwith said Amazing Grace also suffered from internal problems; and Infantino clarified the dog’s internal complications as a severe uterine infection, probably resulting from  her state of malnutrition.
Moreover, her foot injury would best be described as missing fingers up to the knuckle, with the bone of one index exposed.
“She is such a brave dog to have taken care of her puppies so well. The puppies looked so good and beautiful, ” said Infantino.
“She was only 10 months old, probably impregnated during her first heat. She was just a baby herself while delivering and mothering these pups. People don’t think about what they are doing (the consequences for the animals) when they don’t spay or neuter their animals,” said Dillwith.
Infantino performed additional surgery on the dog’s foot and performed a complete ovarian hysterectomy to spay her and treat her complications.
Dillwith said the dog understands when humans are helping her and is very cooperative when the bandages need changing. The dog is healing well.and may be adopted by “a very special person,” said Dillwith.
Two of the puppies have been adopted, and the other five are ready for new homes. [How ironic that the government trapper goes to great lengths to save a dog and pups, while earning a living killing coyotes. Some canids are more equal than others.]

In Cold Springs, Sand Piper Drive, there were several 3-legged cats noted in the neighborhood. There is one back yard that is semi-fenced. Evidently this neighbor considered cats a nuisance, so set traps for them. Now the neighborhood is over-run with mice and all the feral cats are gone. There had been about 10 cats. This process happened over a 4-year period.

“Guy” Asks for His Trap Back

I was hiking with a woman and a German Shepherd. The Shepherd stepped into a trap in the river. It took two people to get the dog out of the trap. His front leg was broken halfway up. A “guy” came by and asked for his trap back. The hikers refused and took it with them to the police. The dog owner had to pay the entire vet bill.

Doesn’t look like this “guy” offered to pay damages! Since passage of SB364, law requires trapper ID or NDOW registration number on all traps set on public land. And the public has the right to disturb a trap that poses obvious risk.