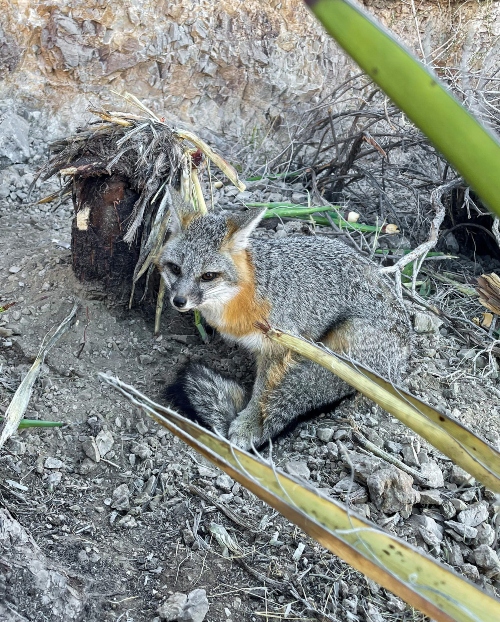 There has been overwhelming response to the story of the family who freed the fox, then were threatened with fines and arrest for their act of kindness. The threats were delivered by Nevada Department of Wildlife due to pressure from the trappers. The story went viral and reached compassionate animal-loving hearts everywhere. Many want to donate toward the Vaske family’s defense.

To respond, along with our colleagues from Animal Protection Affiliates, we in Nevada established Nevada Trapping Victim Fund. The Fund will cover expenses for the family’s defense. Any funds left over, or contributed in future,  can be used for other victims of trapping – which could include veterinarian bills for injured pets, fines, etc.

We will  help people, and we will spotlight cases. After fifteen years of collecting trapping victim stories, the sad truth emerges – trappers fly under the radar – injuring pets and never compensating for veterinarian bills; disregarding laws and regulations; wielding undue influence on government agencies. This needs to be exposed!

Donations to the Fund are not tax deductible at this time. All gratitude for any donations! 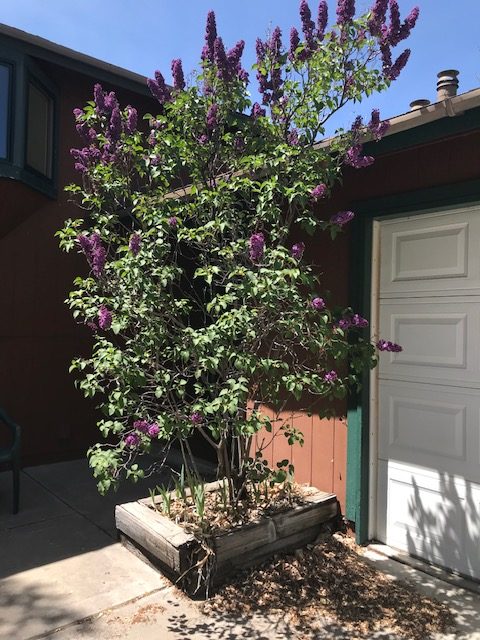 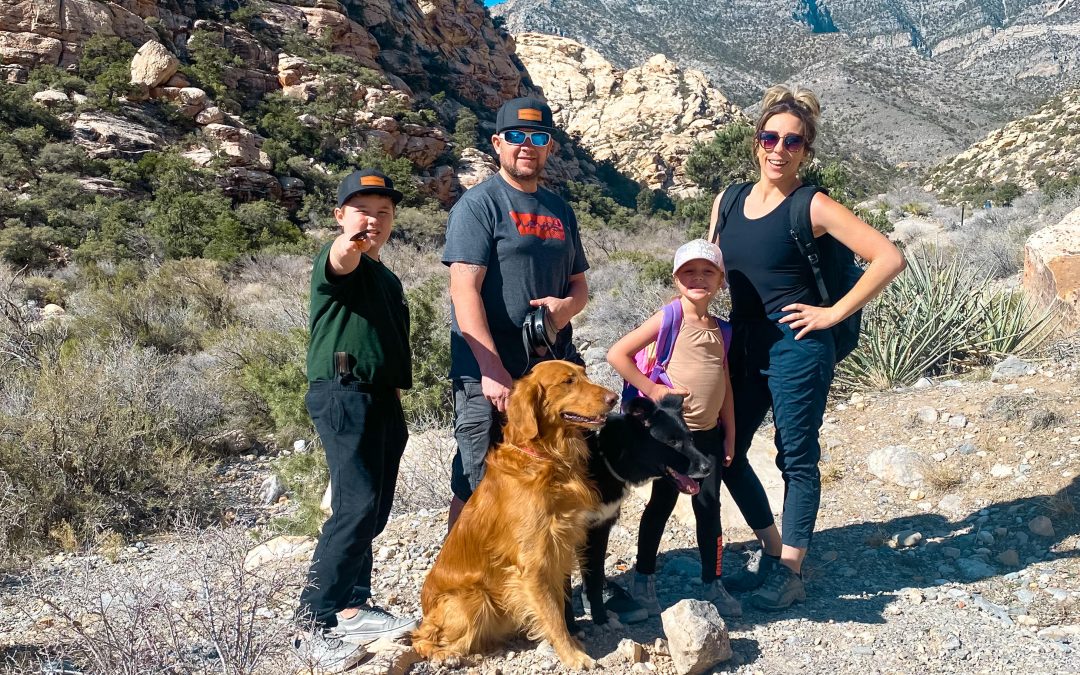 This story was featured on Las Vegas KTNV March 1, 2022. It went viral in the animal advocacy world and here is the story as told to TrailSafe Nevada by Jessica Manners. This family acted with compassion and courage and ingenuity. By telling their story, they bring a spotlight to the danger, cruelty and indiscriminate nature of trapping, and thereby do a great service to us and to our Nevada wildlife.

It was a weekend like so many others.. my husband & I, our 2 kids Dylan & Brooklyn, and our 2 dogs Floki & Frankie (a spazzy, sweet golden retriever and a friendly talkative husky/lab mix with a personality) jumped in the car ready for an adventure. My family & I have always loved to hike and explore the desert mountain area west of our house, and do so frequently. We drove a few miles into the desert and found what we thought was the perfect spot for a family hike. We started up the mountain with no clue what we were about to experience.

The first thing that caught my attention was a loud snapping noise. I turned to see my golden retriever baby standing next to a steel leg hold trap that had just been set off. My heart DROPPED, but before I could even react I heard a loud screaming noise coming from the other direction. We ran over to investigate and came across this gorgeous little fox injured and stuck in another leg hold trap. It absolutely broke my heart. We are huge animal lovers and thought FOR SURE we just stumbled across something highly illegal.

Our kids looked up at us with so much concern in their eyes as if to say “what are we going to do?!” and we knew we had to do some thing. To us, walking away from that animal would have been like killing it ourselves, and we just couldn’t do it. So we ran home and gathered all the supplies we could think of.

My husband (who we call our personal MacGyver) found a broom handle, cut off the end with a saw, folded an extension cord and fed it through the pipe to make a dog-catcher like “loop” at the end. I had the idea to grab a plastic laundry basket so we could put it over the fox and get to his paw without getting bit.

We raced back to the scene, supplies in hand, and found this poor little creature curled up around the trap looking like he was ready to give up on life. It was heart breaking. We knew whatever we had to do, we were going to get this animal free.

My husband slowly and carefully placed the dog catcher loop around the fox‘s neck and secured him. (He was so calm, it was like he knew we were there to help)  then I gently placed the laundry basket over him so that now just his arm and the trap we’re sticking out. My husband (and hero who watched countless YouTube videos on the way there to learn how these traps work) was able to open the trap and release his paw, allowing the fox to run back into its den.

That’s when I realized the trap was literally 3 feet from his home. They put it on his front doorstep so there was no way for him to come out of his home WITHOUT stepping in it. It made me sick.

When we reported the incident we were shocked and horrified at what we learned… not only is trapping LEGAL in Nevada, but its practices are out dated, barbaric, and inhumane.

We learned that here in Nevada trappers only have to check their traps every 96 hours. Meaning an animal can be stuck in a trap for 4 DAYS with no food or water, exposed to the elements and predators with no way of defending itself. And often the trappers stick cattle prods up the animal’s orifice to kill it, IF the animal hasn’t already chewed off its own limb out of desperation.

Something has to change. Even hunters have a duty to pursue, a duty to make sure an animal doesn’t suffer. And suffer they do in these traps, so much so that over 120 countries have curtailed or outright banned trapping altogether. But here in Nevada that’s not the case.

it’s time to stand up and make our voices heard, Nevada. 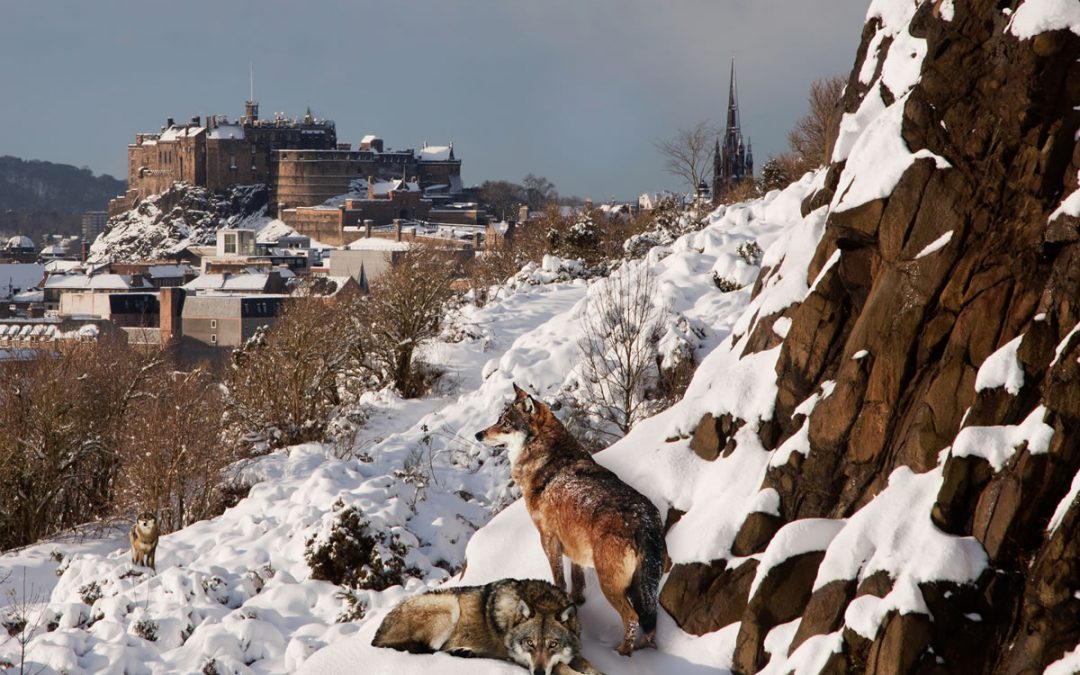 Charlotte McConaghy’s book Once There were Wolves

Carol Garlington is a trained and certified Massage Therapist whose love for animals and the outdoors is reflected in her writing and her activism.

Martin A. David is a multi-discipline artist who, like his wife Carol, applies his writing skills to conservation topics.

Charlotte McConaghy’s book Once There were Wolves (Flatiron Publishers—2021) has been coloring my mind ever since I read it. In her novel the Australian writer imagines re-wilding the wolf population in Scotland. The book deals with domestic violence as well as violence towards wolves, horses, the earth itself. The drum beat of rapidly accelerating climate change provides the pacing for this rarely comfortable but often lyrical read.

As Inti Flynn, the novel’s central character, points out, “…the physiological response to witnessing someone’s pain is a cringe, a recoil, a wince. We are hardwired for empathy. Once upon a time I took delight in feeling what others felt. Now the constant stream of sensory information exhausts me…I can’t get lost in the wolves or I won’t survive.”

Flynn, who has been sent to Scotland to lead a team of biologists reintroducing wolves to an area of the Scottish Highlands, is affected by the violence she sees on all fronts. She is able to relate the cruelty to the wolves to the cruelty her own sister faces in a dysfunctional relationship. One can only imagine how that empathetic character would react to scrolling through the news reports of fighting in the Ukraine.

Another major theme of the novel is the thorniness of communicating when generation-held opinions clash. One poignant passage has the main character sharing a recording of wolves howling in such a way that the person she is trying to convince to listen actually does listen and begins to share her passion for wolves. As she points out, they are animals who have in their power the means to restore a degraded environment and make it sustainable again.

This book does not devastate—which is more than I can expect from tomorrow’s news—but it does present questions that are very real in our world: Will the wolves survive? Will the women? Will violence or measured communication have the upper hand?

Annoula Wylderich has been an animal advocate since 2008, campaigning for ALL animals. She is the founder of the Vegas-based grassroots organization, Animal Protection Affiliates. She has been Senior District Leader for HSUS, State Director for Animal Wellness Action, and board member of the NSPCA. She has been recognized for her advocacy by both the HSUS and PETA
Here she adroitly sums up what’s wrong with trapping.

One would assume that if you are going to end the life of an animal, for whatever reason, that you would do it mercifully. Even hunters have certain ethics which they follow, if they pursue their activities with any integrity.

However, trapping seems to be in a category all its own and among the cruelest of sportsmen activities. It constitutes a small percentage of the hunting population (thankfully), but renders so much suffering, that over 120 countries have banned or curtailed trapping. That sends a significant message to the rest of the world, which the U.S. would be wise to note.

Traps cause unimaginable suffering to both intended and unintended victims, including endangered species and pets. They have resulted in orphaned cubs and pups, in animals suffering prolonged deaths or maiming, and in animals experiencing pain, fear, hunger, thirst, exposure and attacks by predators as they lie helpless and unable to defend themselves. While it’s incomprehensible that their torture could last the typical 36 hours that most jurisdictions stipulate for trap-check time, Nevada still permits a 96-hour timeframe – IF trappers even abide by this regulation. We have no way of knowing and requests for any significant data on trapping in our state have produced disappointing results.

This is an outdated, archaic activity that needs to be re-visited by our leaders if we truly value our ecosystem and the proliferation of eco tourists to our state. Those tourists are not paying to have their safety compromised nor to come across animals in various stages of suffering. It’s time, Nevada. For anyone who may be interested in updates or opportunities to help advance more compassion in trapping, please contact me at wylderich@cox.net

Concerned residents can also contact the Governor’s office to express their opposition to trapping. In Southern Nevada, call: 702-486-2500; in Carson City, call: 775-684-5670. Let him know you consider trapping devices to be cruel to animals and unsafe for the public and our pets and that you wish to see them banned.