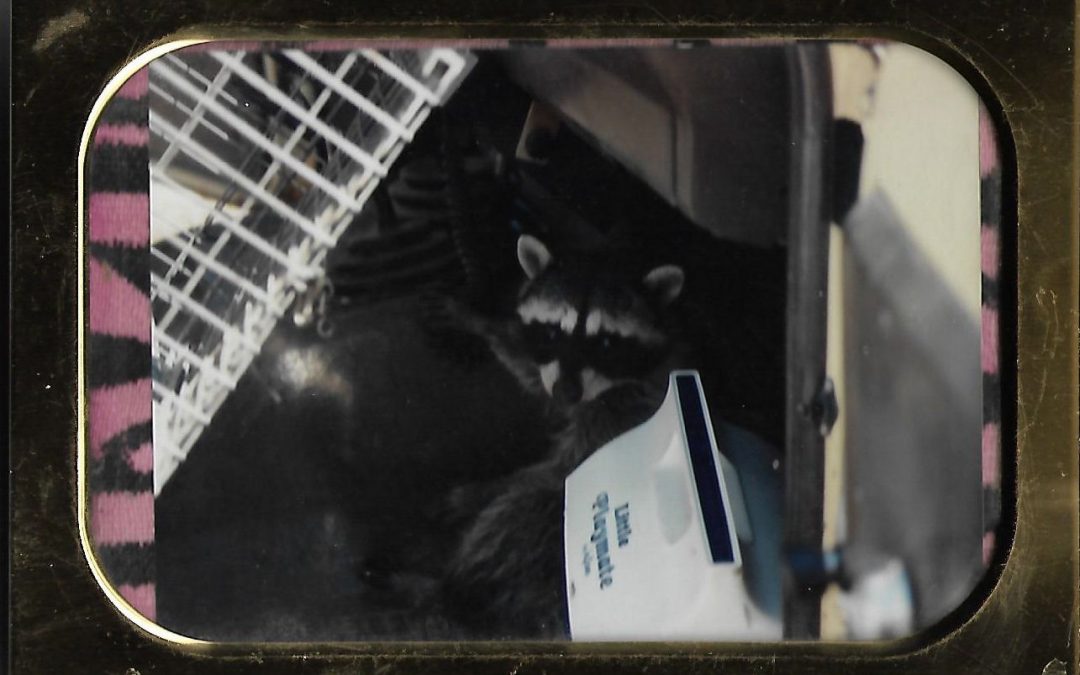 Here a raccoon rests in comfort after liberating herself from a carrier in the back seat and making her way to a cozy spot on the front seat floor as we drive to the mountains.

Recently I read a blog post which referred to raccoons as “trash pandas”. This was meant in good-hearted jest and it was written by someone who in fact respects animals and has devoted his career to them. Nevertheless, it’s been on my mind for a while and I feel compelled to address the implications of this term.

Because people take an interest in animal-centered posts and blogs and because they deserve accurate information, and because I was lucky enough to raise a baby raccoon to adulthood, it’s time to speak up for the raccoons. Raccoons have had a dirty deal in so many ways – worst of all they are victims of fur trapping – and they are nothing more than “varmints” under the law with no legal protections – the world needs to find out that this is a brilliant creature fully worthy of awe, admiration and love.

5 Reasons Raccoons are smarter than You: From https://www.biotechpestmanagement.com/article.cfm?ArticleNumber=13
It is unfortunate that this spot on article comes from a “pest management” company, which would indicate raccoons are “pests” but nevertheless it pinpoints raccoon brilliance and presents convincing reasons that they are far more than “pests”.

They rank above cats and just below monkeys on the mammal IQ scale. Monkeys are generally considered to score just below humans and great apes on IQ scales, which means that raccoon intelligence is not as far behind us as we might like to think.

Based on several experiential studies based in Canada, scientists saw that raccoons tended to use situations to advance their intelligence. A series of trash can lids were developed with the intention of keeping raccoons out, and with each progressive round, they managed to figure out the contraption and eventually open up the trash can. This indicates that as humans have evolved into more urbanized settings, raccoons have evolved with them, and are able to learn and store information from new experiences.
My personal experience: I worked for a while with an animal rescue. They set box traps for raccoons who were getting into a family’s cat food. Several cats were trapped, but no raccoons. Raccoons did learn how to steal the bait, though. I transported a raccoon to more suitable habitat in an airline-type animal carrier. We started with her in the carrier in the back seat. After a few minutes, she was in the front of the car, sitting on my feet, and the carrier door was neatly opened, screw by screw.

Raccoons have proven capable of domestication, which is no simple feat for the average animal. Not only are they able to be domesticated, once they are domesticated, their owners are often able to teach them skills the average human toddler would possess. One such raccoon, Melanie, has learned how to ride a bike, clap, dance, and ring a bell.
Mine groomed me nonstop with his busy little hands. My teeth and hair were the most interesting to him. He was fiercely loyal and affectionate.

d. Lab Rat – NOT!
Raccoons were once considered alongside rats, mice, and monkeys as the ideal animal for lab testing due to their notable intelligence. However, they were determined to be too strong-willed and even too smart for lab testing purposes. They would often outsmart the lab techs and escape to hide in air vents, and turned out to be very defensive when they felt threatened.
Trust that a defensive raccoon is not somebody you want to face! They put on a display worthy of an animal ten times their size.

Raccoons can survive and even thrive pretty much anywhere across the globe, so long as there is a source of running water nearby. They are found throughout Europe, North America, and Asia, and are well known for their ability to protect themselves and for their resourcefulness. This level of intelligence and adaptability is not found in many other creatures and is yet another characteristic of raccoons that makes them stand out.
They are omnivores. Mine preferred eggs and chocolate above all other substances.

They might not quite be smarter than humans, but they’re definitely not far behind.

This has to be clarified for readers new to mammal taxonomy, and for me! It’s confusing, but here’s what I think I know:

Raccoons and pandas are distinct species with separate evolutionary histories. Looking at a picture of a red panda, it’s easy to see why some would think it’s a form of racoon. And some taxonomists have thought so. Nevertheless, the two are quite distinct, not to mention that raccoons developed in North America whereas red pandas live in Asia. Both are distinct from the Giant Panda . The Giant Panda also hails from Asia.

Google: The red panda has given scientists taxonomic fits. It has been classified as a relative of the giant panda, and also of the raccoon, with which it shares a ringed tail. Currently, red pandas are considered members of their own unique family—the Ailuridae.

Wikipedia:
The raccoon (Procyon lotor), . . . also known as the common raccoon, North American raccoon, northern raccoon, or coon, is a medium-sized mammal native to North America. The raccoon is the largest of the procyonid family, having a body length of 40 to 70 cm (16 to 28 in) and a body weight of 5 to 26 kg (11 to 57 lb).[7] Its grayish coat mostly consists of dense underfur which insulates it against cold weather. Three of the raccoon’s most distinctive features are its extremely dexterous front paws, its facial mask, and its ringed tail, which are themes in the mythologies of the indigenous peoples of the Americas. Raccoons are noted for their intelligence, with studies showing that they are able to remember the solution to tasks for at least three years. They are usually nocturnal and omnivorous, eating about 40% invertebrates, 33% plants, and 27% vertebrates.

The red panda (Ailurus fulgens) is a mammal native to the eastern Himalayas and southwestern China. It is listed as Endangered on the IUCN Red List because the wild population is estimated at fewer than 10,000 mature individuals and continues to decline due to habitat loss and fragmentation, poaching, and inbreeding depression.

The red panda has reddish-brown fur, a long, shaggy tail, and a waddling gait due to its shorter front legs; it is roughly the size of a domestic cat, though with a longer body, and is somewhat heavier. It is arboreal and feeds mainly on bamboo, but also eats eggs, birds, and insects. It is a solitary animal, mainly active from dusk to dawn, and is largely sedentary during the day. It is also called the lesser panda, the red bear-cat, and the red cat-bear.

The red panda is the only living species of the genus Ailurus and the family Ailuridae. It has been previously placed in the raccoon and bear families, but the results of phylogenetic analysis provide strong support for its taxonomic classification in its own family, Ailuridae, not closely related to the giant panda, which is a basal ursid.

The giant panda ( Ailuropoda melanoleuca), also known as panda bear or simply panda, is a bear native to south central China. It is easily recognized by the large, distinctive black patches around its eyes, over the ears, and across its round body. The name “giant panda” is sometimes used to distinguish it from the distantly related red panda.
++++++++++++++++++++++++++++++++++++++

Seeing the word “trash” in any context relating to raccoons is particularly painful for me. I know they are infamous for raiding trash. I also know professional wildlife managers have so little respect for this brilliant little fellow that they consider them “trash animals” not deserving of protection and subject to mistreatment and slaughter at anyone’s whim.

If everybody spent at least some time with a raccoon, the world would be a better place. They cannot be dominated, thereby teaching humility. If you’re into laughs, nobody tops the chuckling raccoon. I know the question of domestication is tricky and I hesitate to say they should be as prevalent as dogs in our homes, but I’m thinking about it. For now, the conventional wisdom is that they should remain in the wild, and they’re doing a great job of it. More on this in future, one of my favorite topics.