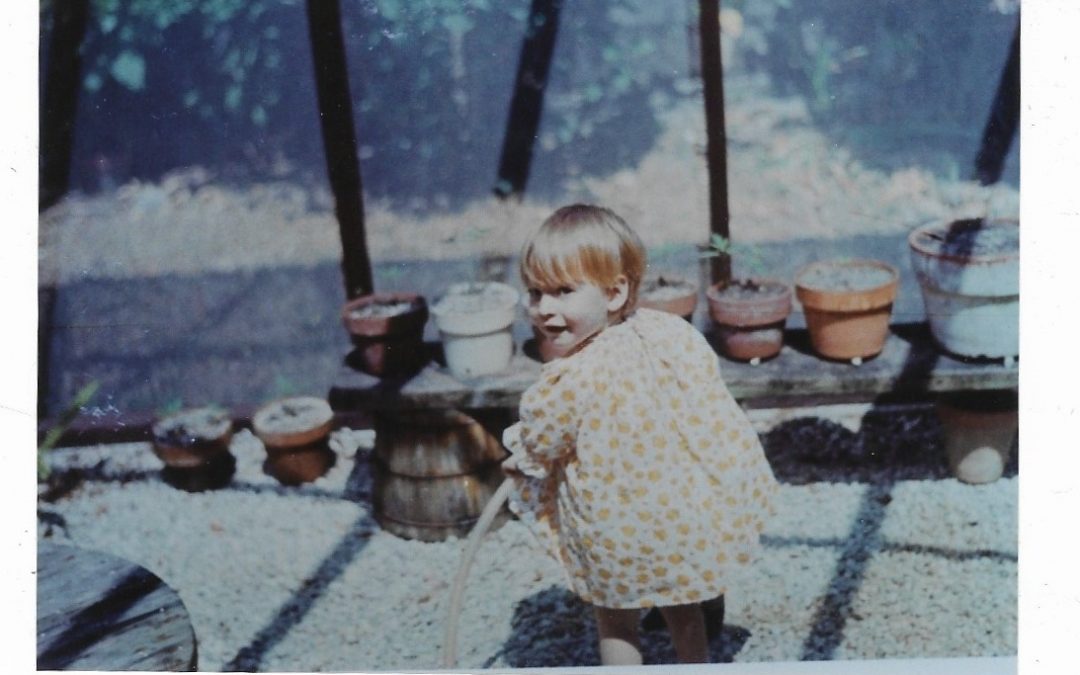 My daughter. My Christmas baby. 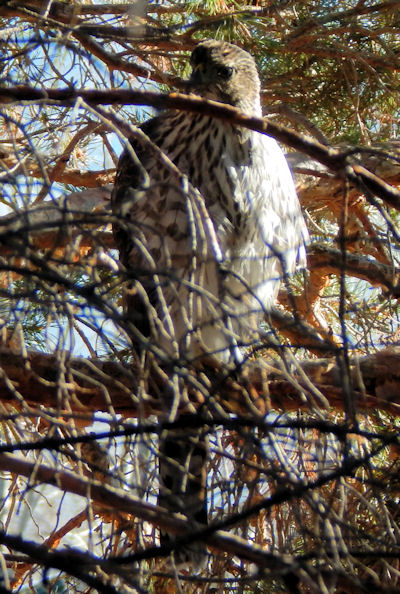 New Yorkers were mesmerized by the appearance of Pale Male, a red-tailed hawk who took up residence on Fifth Avenue in 1991. As a former New Yorker, I often think how some of his admirers would be stunned, as I was, to come West and see hawks every day. Like the blackout circa 1964 when the perpetual city racket dimmed and we could hear crickets chirping – Nature is a celebrated and unexpected guest in the big city. Not so here in the Sparks suburbs a scant quarter mile from open desert. Raccoons, owls, cottontail rabbits, California quail, scrub jays, Northern flickers, American goldfinches, among many others share my third of an acre with me.

More occasionally, over the years hawks visit. They always perch in the same tree in my front yard. They are Cooper’s Hawks in various life stages – all Coopernicus to me. It feels like a gift every time one appears. Take the mythology and interpretations with a grain of salt. In general, hawk mythology is about everything an ordinary person would observe about them: vision, aggression, flying – no big surprises here:

Cooper’s hawk (Accipiter cooperii) is a medium-sized hawk native to the North American continent and found from southern Canada to Mexico.[2] This species is a member of the genus Accipiter, sometimes referred to as true hawks, which are famously agile, relatively small hawks common to wooded habitats around the world and also the most diverse of all diurnal raptor genera.[2] As in many birds of prey, the male is smaller than the female.[3] The birds found east of the Mississippi River tend to be larger on average than the birds found to the west.[4] It is easily confused with the smaller but similar Sharp-shinned hawk. Increasingly found in suburbs and cities.

Feb.21, 2021 Downstairs in office. Eyes blurry from gel drops. Eventually see him/her in fairly low branches of the juniper not that far from me. A small individual with the juvenile tan breast feathers. Clearly hawk behavior eating whatever is held in the talons. Then bounces from branch to branch and takes off. Seeing hawks here more frequently. Will one nest in my tree?

Feb. 14, 2021 About 7:30 AM there he/she is, seeming smaller than previous hawks – on the pine tree with back to me. Black and gray striped tail. Gray back. Ruddy breast and belly. Yellow eye. Standing on whatever it’s eating, tearing off strips. There is a cluster of stuff left on the tree which I think is feathers and not fur.  This one was here a few weeks ago as well.

Jan. 9, 2019 Looking out the front door and hawk swoops by flying low heading south. I see just a flash but know it is her. I go upstairs and there she is on her usual branch with a prey in her talons. Looks like a small bird, but I don’t have glasses so it’s blurry. She is looking around , trying to settle in, but nervous. I am in a chair about 6 feet from the window. I stand up as cautiously as I can, but no good – she sees me. By the time I’m back to the chair with binoculars, she is gone.  Nevertheless, it’s obviously a destination for her so sooner or later I’ll see her again. it is 7:45 AM. Sun has just come out.

Nov. 20, 2018 Dawn’s early light but still pretty dusky. See her/him first through upstairs window whilst in the recliner. Seems very small for a hawk and all I can see is silhouette, but the long tail and the behavior – straight plunge down to the ground, then back up to the branch, is very hawkish.

Go downstairs to computer and there she is right fully in view. Certainly a hawk, but small. I try to move as little as possible and sure enough she/he is eating something and spitting out feathers which float to the ground below. Still too dusky out to see detail and I don’t have glasses on. The hawk’s breakfast continues for a long time. She hops to a nearby branch. evidently the prey which I cannot see clearly – her back is to me this whole time – is pressed to the branch by her foot.

Early sunlight dawns and all I can see is the silhouette with spots of pure gold near the base of her tail and shoulder. I get preoccupied with my business on the computer and this golden moment is over. She must have finished breakfast and gone on about her day.

September 9, 2018 Coming upstairs after a long rather misspent Sunday lazing around and too much You Tube, there on the pine tree on the long extended branch sat Coopernicus! Or is it Coopernicus Jr. or his wife? Hard to say. But a splendid if rather smallish raptor.

I moved backward to pull up a seat and watch him. But he saw me and flew silently down to the fence where he sat for a while, then back up to the branch. He swiveled his head but mostly looking to his left and then straight at me. He stared me straight in the binoculars. Eventually he swooped low and went off to his left. That is where the quail and others hang out. I thought he might catch somebody then return to the branch to eat them, but after waiting 5 or 10 minutes in vain, I let it go and chalk it up to another unexpected blessing. But aren’t all blessings unexpected?

Dec. 22, 2017 The hawk made a brief appearance yesterday but  I had no chance to watch as I had to leave.

Today I had all the time in the world, one of those days where I never get dressed, but just hang out and do small chores. The hawk landed on the pine tree about noon. It’s a moody, gray day. The kind of day where it might snow but t never does. Perfect for progressing through Isaacson’s bio of Einstein.

This seems to be a different kind of hawk even though it’s perched just where Coopernicus sat before. This hawk is smaller, with a surprisingly small delicate-seeming beak – yellow very sturdy legs, 4 bars on the tail, sorta reddish brown under the eyes. White very short bars – could almost be called spots – on wings – two on uppermost wings, when seen from the back, then so forth down the wings.

There is an abundance of white around the tail on both sides. Its back is to me most of the hour I watch it through the binocs. But later on, when he/she is done with the meal, it faces me and I see a mostly white breast abundantly speckled with gray.

I gradually realize he/she is standing on its prey. The new kill is flattened beneath the talons, flat across the branch. He/she begins tearing away at the kill, one beakful at a time. Onward through red meat, intestines, so forth.

I go do a load of laundry and come back and it looks like the meal is gone. But not so. Somehow it is suspended on the far side of the branch and hawk resumes pulling away beakful by beakful. Between beakfuls, he/she darts glances sideways or even back toward me just for safety’s sake. But he/she doesn’t actually move away from the perch.

It’s very hard to determine if the meal is a bird or a mammal. After a while, Coop is pulling up beakfuls of white fluff, but I can’t tell if it’s feathers or fur. Toward the end of the feeding, he/she is pulling up strips of meat from around a little ribcage that is now bare and sticking up.

Then after about another hour of observation, lunch is over. Coop pecks around as if to see if any morsels were overlooked. Finding nothing more to eat, the raptor takes off with two rapid wingbeats. Headed south. 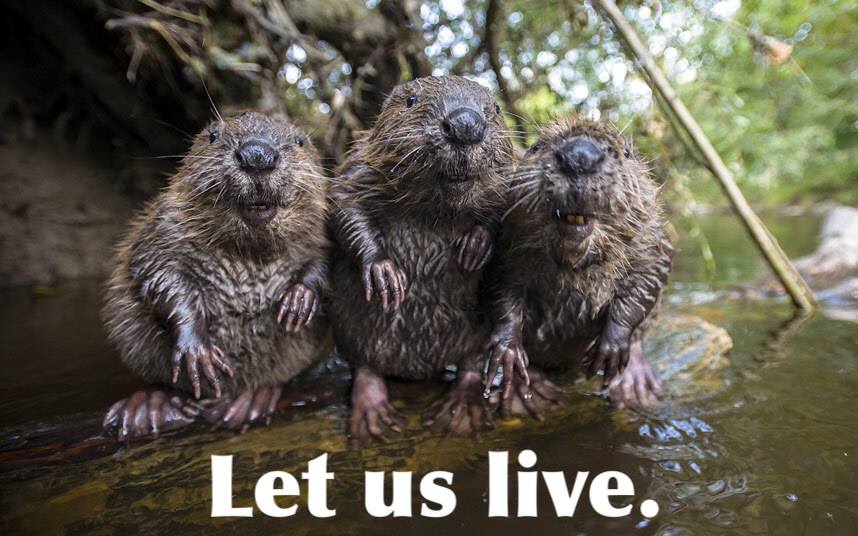 Trappers are paid by city and county agencies and private land owners to trap Nevada beavers. This is a lethal solution to a situation that instead can be handled humanely. Almost every time trappers are involved, the beavers are killed. Trappers uphold the deep-rooted, long-lasting rural belief that beavers are nothing but bad guys, causing depredation.

Where conflicts arise, non-lethal solutions can be employed, creating a win -win situation. Locally, Sierra Wildlife Coalition provides these solutions. Modern science now demonstrates the amazing extent to which these “Nature’s engineers” benefit environment and biodiversity. Now they are respected as a vital keystone species.

Not only has trapping never played a necessary or useful role in wildlife management, it has been actively detrimental to wildlife conservation.
Trapping wiped out beaver populations. . . Many of these beaver populations never recovered, rendering this damage permanent.
Beavers are ecosystem engineers . Their dams and ponds sub-irrigated fertile floodplains, boosting productivity and biodiversity. . . Their activities benefit a variety of wildlife from waterfowl to trout and elk. – Erik Molvar, Executive Director of Western Watersheds Project

What Good Are Beavers?
Mike Callahan , Beaver Solutions
Heidi Perryman, Worth A Dam

Most people only become aware of beavers when they are a nuisance, but did you know that biologists classify beavers as a Keystone species? Beaver ponds create wetlands which are among the most biologically productive ecosystems in the world. They increase plant, bird and wildlife variety, improve water quality, and raise salmon and trout populations. This one species supports thousands.

How is this possible? By opening the tree canopy, sunlight reaches the water and triggers an explosion of biological activity. Algae and aquatic plants grow in the sun drenched, nutrient rich water. This organic material supports microscopic organisms, which are eaten by a variety of invertebrates. These become food for fish, birds and mammals. An entire food chain is created in a beaver pond.
While infamous for killing trees, beaver dams actually create diverse habitats. Grasses, sedges, bushes and saplings grow on the perimeter of the pond. These plants provide food and cover for foraging animals.
Beaver ponds become magnets for a rich variety of wildlife. From important game species like wood duck, mink and otter, to vulnerable anadromous fish like rainbow smelt, steelhead and salmon, biodiversity thrives due to beaver ponds. Beaver dams also protect downstream spawning areas from sedimentation, and create cool, deep pools which increase salmon and trout populations.

How do dams affect water quality? They actually improve flow and quality. By functioning as natural sponges that store runoff water and slowly release it, they reduce downstream flooding and erosion. The algae, plants and sediment in the pond improve water quality by absorbing dissolved nutrients, processing organic wastes, and removing runoff toxins (e.g. heavy metals, pesticides and fertilizers) from the water. These wetlands serve as the “Earth’s Kidneys”.
Beaver ponds also recharge our drinking water aquifers, stabilize the water table, and better maintain stream flows during droughts. Beavers are even being relocated by states throughout the west to improve arid lands.
Beavers are sometimes regarded as pests, but in truth there isn’t a single species that will better benefit your watershed. Although they can present a challenge, by using flow devices you can control problematic flooding and reap countless environmental rewards.