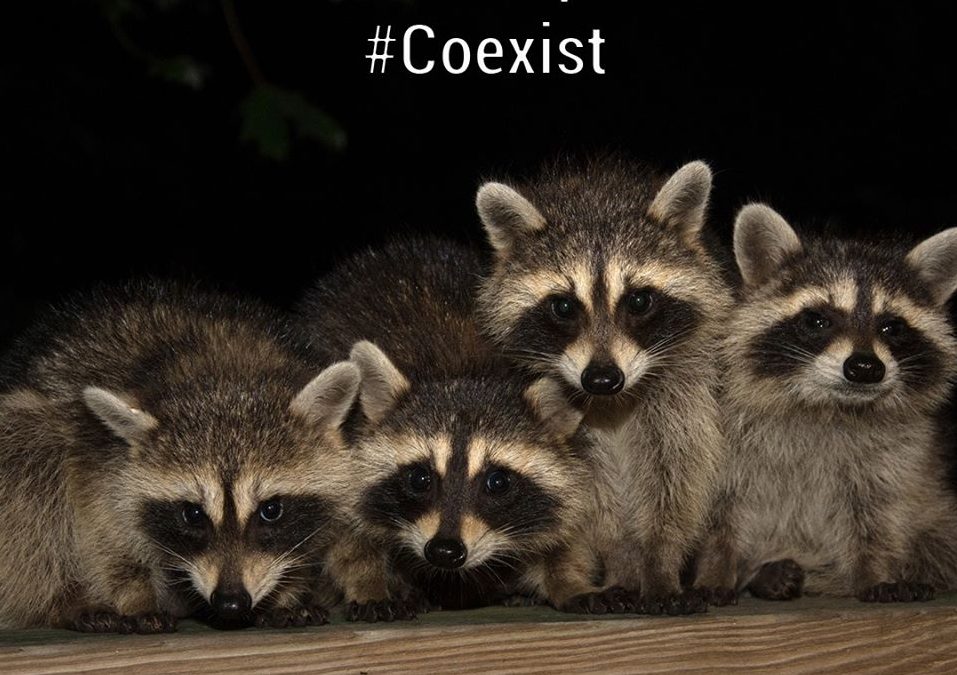 The Raccoon is the survivor, who lives alongside man as if to show him that he cannot truly conquer the land.

Keeping a raccoon as a pet is highly controversial. Like the cat – who can be her own master, living by her wits, or maybe cozy up to you – or the coyote who thrives in rural/urban/or whatever – this guy can adapt to a variety of situations, so it’s not a black and white question. With raccoons, it also depends upon the season of the year. This story wouldn’t have happened if the raccoon was older or if it was autumn or winter. But, this summer my 4-year-old daughter and I were caretaking an old family property in upstate New York. We had a rundown house that was receding back into Nature, a scattering of furniture, 160 open acres and a lake. If you have a setting like this, why not share it with a raccoon, if you’re lucky enough to find one.

Anyway, for a short time Jacques was with me – hard to define the relationship as pet/owner – but we lived together. The crowning animal experience of my life. Daytimes I would take him to the lake – him riding on my shoulder, under my long hair. In the water, he scrabbled about in the shallows. But he always stayed nearby. I never taught him anything. He chose to be close. No, he didn’t wash his food. But he loved to manipulate wet rocks.

As for bathroom habits, he chose an area and that was the latrine, just outside the house, and that was it and I never taught him. He just did it.

Constant rapid manipulation of stuff was his joy and set him to chuckling. I got no sleep because he wanted to spend the night perched on my chest, relentlessly trying to manipulate my teeth, and chattering away. Finally I had to close the door and leave him in the hallway with a steel tub full of old wooden doorknobs floating in water. This occupied him for hours. He kept up his one-sided conversation as the knobs banged and splashed.

Known to be extremely vocal creatures, raccoons interact by using more than 200 different sounds, which include purring, chittering, growling, snarling, hissing, whimpering, and even screeching like owls. Baby raccoon sounds include mewing, crying, and whining.
For example, raccoons may whistle like an owl when communicating with other raccoons. Raccoons also growl in defense when in the presence of danger. Other vocalizations may include a low grunt, loud purr or even a scream (when under stress). There is also a kind of roar. If you heard it from a distance, you might think a 30 pound animal is lion-sized.

He got his rabies shots, nearly destroying the vet’s office in the process. He literally bounced off the walls, spraying from his anal glands as two vets tried to catch him. If you haven’t heard an angry raccoon yet, you need to. You will think the sound comes from somebody as big as a tiger, let alone a cute furball weighing no more than 20 pounds. I was delighted; why were these men so dour when we left? If I must analyze – Jacques was the channel for all my resentments and discontents with society. I reveled in his utter insubordination. It was the same with the impossible dogs I chose to love in later years. Sadie, for example…

He knew my mom was afraid of him. He recognized the sound of her car and when he heard her coming, he rubbed his hands together and chuckled, then he hid under her chair. She sat, and he sprang out and grabbed her ankles every time she came over, chuckling to himself over her screams. I can’t say why she never anticipated this, but he stayed a few steps ahead of her. It was all a game. He never hurt or scratched any of us.

He opened jars and soda bottles with screw on tops. He loved sweets. He loved eggs. Also milk. Feeding an omnivore is a no-brainer. Use anything you’ve got.

If you do not have a need to dominate, if you have a sense of humor and access to the outdoors, if you can appreciate a brilliant non-human intelligence, then I say do yourself a favor; spend some time with a raccoon.

The Raccoon is the trickster,
the sly and crafty one
who may appear slow,
but who is quick
and agile; the opponent who outsmarts his enemies,
and who uses his hands
like a human.

The cat food bowls in the garage emptied pretty quickly. But Bub and Nutmeg stayed sleek so I never thought about it. They were indoor/outdoor cats with a cat door to the garage. They hung out on the roof and the neighbors’ boat. I left them at a cattery while I went overseas.

Then right after I got back from my 3-week trip to India in January 2000 she – an unnamed raccoon – was in my garage when I opened the door, drinking out of the cats’ water bowl by the door. So she knew the territory well. She was not particularly impressed by my presence. She sauntered to the cat door. I’ll never know how long she’d been a trespasser.

About 5:15 AM Barest dawn. Roger barking at the door that opens to the deck.
I flip on the light to see a striped tail facing us as the creature pulls itself up the border of the deck, feet on the flower planter box. I instantly know it is no cat. The movement is slower, more deliberate.

She turns to look at us, the classic coon face in full view. I say “she” because she visits a few days later with her kits. I turn the light off and hug the still barking Roger to calm him down. The barking had no visible effect on the little prowler.

She tests each potential departure route; eventually she goes down a nearby tree, head first.

A few forays here and there – back up once more – then she descends to the shadowy turf of the side yard where she blends into the darkness.

At first shone flashlight on Mom. She was hanging head first on corner of deck. She noticed me; again, no big reaction on her part  . She’s fat and the kits look healthy. So they get food someplace.

Cars go by but nobody knows or even suspects. And until now, I didn’t know they lived here, at least part of the time. Raccoon moms have a few dens in different locations, and move the brood back and forth as she sees fit.

This keeps happening. Stuff I thought I stashed safely for later disappears. The best stuff. Frantic searches through old photos, old discs, old flash drives Can’t find notes I surely wrote about this encounter, so can’t pinpoint the date. I do know this happened on a night probably in February or March sitting at my computer writing final draft of testimony for my first Legislative hearing to push the trappers off our firearms restricted congested areas. And push them further from local hiking trails and parks. It worked and we got SB213. No question of sleep, writing through the night.

There is what I call an animal sidewalk directly outside my basement office window. It’s a concrete skirting that borders the east side of the house which is supposed to prevent floods into this finished basement – which I only heard about after buying the house.

Various animals parade here and pause to stare at me behind my monitor.

On the night in question, I pause my keyboarding to gaze out the window into the face of a raccoon. We take a good long look at one another before he/she ambles away. I take this as a powerful portent of success tomorrow and of course approval and support from the animal souls. I’m flooded with euphoria which, it turns out, was justified.

I name the pointy-nose masked agent of the Universe Wellstone. That’s because Paul Wellstone, liberal warrior, died  October 25, 2002 on a charter plane in Minnesota fog along with his wife, a grown daughter, and somebody else…an aide? Now for reasons lost with my lost data, I care passionately about this loss which I just found out about, and no other name will do for this harbinger of success.

Between 8:30 -9PM Watched a raccoon walk along sidewalk then up the juniper. She takes a running jump, grasps the trunk and pulls herself up.

In the photo above, the juniper’s highest branches touch my roof, providing a bridge for the raccoons.

This bridge sees raccoon foot traffic on and off for many years. From the living room one can hear overhead a scratchy shuffle and sometimes a two-footed plodding that sounds like a human walking; amazingly heavy tread upon those plantigrade back feet.

After several sightings, I know they come down headfirst. Then they jump down when they’re about 2 feet above ground. The peeling bark beneath their claws sounds like rain falling.

5:40 AM One kit gets itself stranded on far pine branches high up over the driveway. I can see that part of the tree swaying although there is no wind. Mama appears, coming out off the roof along the branch that extends over to my roof. She gives a few harsh chirps. Then she makes her way closer to the little stray. Little stray comes toward Mama very slowly and hesitantly. Mama is too smart to go out on untested branches. She leaves but the little kit finally makes it to the overhanging branch and slowly walks along toward the roof. Gets a bit halted by fork in middle of branch, but takes his/her time, regains balance and tightropes it onto the roof. Mom keeps an eye on him, but he has to do it.

At least 3 or 4 occasions Sadie barking at night. There are coons on the upstairs deck. At that time, there was a healthy aspen to the west with branches providing easy access to the deck. I learned it was Mom and 3 kits. They moved very slowly and cautiously from branch to branch. I didn’t feed them enough to sustain them, but I did leave out occasional treats. A package of sliced turkey was as far as I ever went. Mama was seated at right angles to me and I could watch her in profile as she picked out one slice after another, held it dangling to her uptilted head, and lightly chewed with her pointy back teeth.