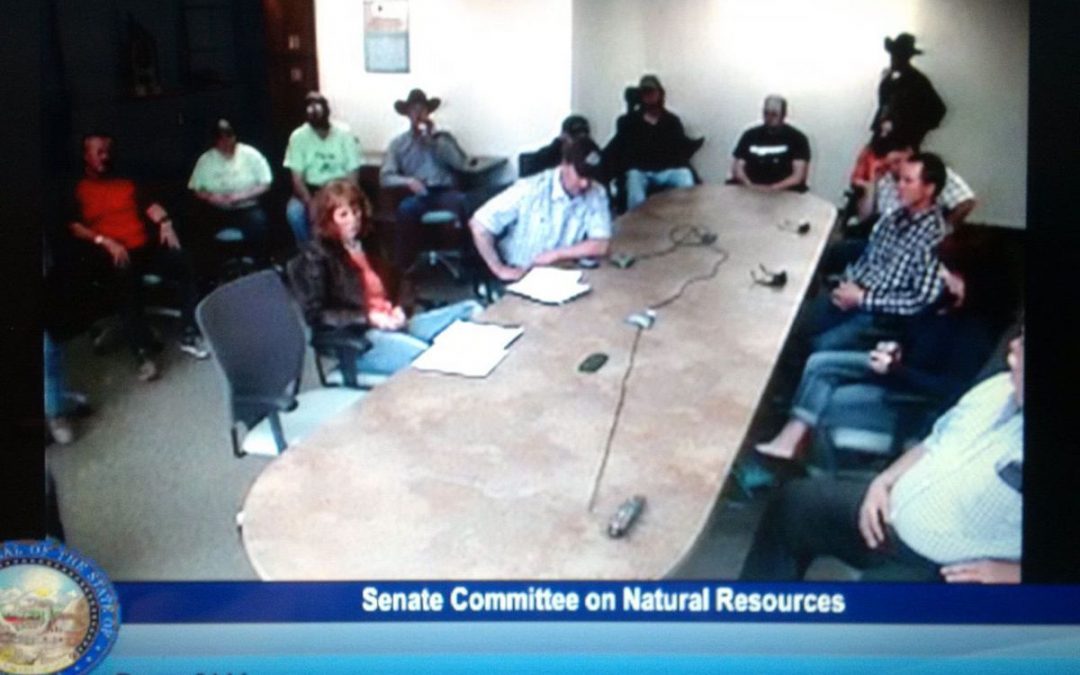 We flew to Las Vegas on our own dimes.

Yesterday in Las Vegas was like a bad acid trip. Don’t ask me how I know. I wish what happened in Vegas stayed in Vegas, but it’s right here to haunt me today.

First off, a girl in a flowered dress tells us she just started trapping and she finds it “empowering”.

Then a guy in an American flag T-shirt lifts each of his pre-school little girls up to the microphone so they can pipe: “I like hunting and trapping.” A colleague behind me gasps: “Child abuse!”

Then the Committee sets upon Dr. Molde’s data – painstakingly collected utilizing much of Nevada Department of Wildlife’s (NDOW’s) own data – like a pack of wolves. (Dr. Don Molde is a retired physician who has been an ardent animal advocate for over 40 years.) Sullivan – trapper representative on the committee – is alpha predator calling the data: “amateur science” and “nonsense” and “deception”. Russell Woolstenhulme – NDOW data guy – explains away years of disregarding nontarget kills and citizen complaints, years of partial response from trappers – who are supposed to fill out an annual report, but in fact few do so – leaving us to question where the truth lies in this debate.

Sullivan tries to get Russell to issue a scientific “opinion”, but this does not happen. Dr. Molde is not there to defend his research.

Responding to trapper bemusement about why all this is happening, Committee Chair Commissioner Dave McNinch makes one of the few humane or even sensible remarks, explaining that “it comes down to values” and that there is such a thing as humane issues. He adds trapping is  PRIVILEGE, not a RIGHT. He should be congratulated.

In a breathtaking turn-around, Commissioner Jack Robb – who is also NDOW Deputy Director – distances himself from his vote a few weeks ago to recommend one-day visitation for skimpy areas in the Sierra Front. Now he’s making trapper education a bargaining chip. He’s denying that’s what he’s doing, but that’s what he’s doing. The trappers want the education “in lieu of” shorter visitation. Jack would love to give them that but he makes references to the Legislature and their expectations, so you can see he thinks his hands are tied even though the Legislature gave him carte blanche to set this policy.

Of course the Nevada Trappers Association (NTA) boys want to run the education program. Robb suggests  NDOW should run it.

So now shorter visitation is a bargaining chip as is trapper education.

NTA President Joel Blakeslee mistakes a room full of glaring trappers and horrified animal advocates for a therapy group. He bares his soul to us regarding his unfair and unjustified citation for failure to visit his traps (for somewhat around 10 days). He had pneumonia. He tells us what he’s coughing up. He’s almost dying although miraculously well enough to stumble out of his death bed and fly to Las Vegas. He didn’t get his meds. He and Larry Johnson rumbling around the outback had a flat tire and who knows what else befell them. So the state shouldn’t even consider higher demerits for failure to visit trap (which, to my surprise, they are doing) Rising to flights of pneumonia-induced eloquence, he tells us there’s a bill already drafted to “shut down Mt. Charleston”. He accuses his opposition (us) of “cultural genocide”. He is “falling on his sword” being destroyed “inch by inch” by “Pol Pot, Germany”. His trap-baiting, animal strangling culture is being decimated “a pound of flesh at a time. Keep your dignity. At least you fought for it.”

Jack Robb tries to sound equitable – claims the Trapping Regulation Committee represents “all citizens” “We are the social arm of NDOW” Joel: “it’s the wrong thing. It’s not telling the truth”. “it’s all about us losing. It’s also about human fairness”.

Hard to tell if the focus of his grief was the threat from NDOW to shorten visitation times, or the modest suggestion from the Committee to increase demerits for violations Jack Robb deems “willfully malicious”.

At the end, I am not clear what  will happen with the hunt units around Las Vegas. Sullivan wanted Commissioner Dr. Karen Layne’s ( she is the sole animal advocate on the Commission) map to shrink to ¼ of its current size and argued with every word she said.

We were mocked in absentia for leaving at 8PM to catch our flight back to Reno. We missed four more hours of this which, we heard later, went on until midnight.

Overview
Trapping animals with devices such as the leghold trap, the snare, the Conibeartm type body gripping trap is cruel, indiscriminate, antiquated and opposed by all major animal advocacy groups. TrailSafe Nevada was a coalition of concerned citizens who introduced successful legislation to at least somewhat regulate use of the devices. This work has begun and we have every hope and confidence that it will continue.

Everlasting gratitude to these compassionate, fearless leaders and everybody else who helped along the way.

Between 2010 and 2017, TrailSafe prevailed with the Nevada Legislature and three of our trap regulation laws were passed in three different Legislative sessions. These were SB 226, 213 and 364. Each will be described below. Contact info@trailsafe.org for more detail.

We approached the trapping issue incrementally; trapping is so politically entrenched in our state that we could not hope for an immediate ban to all commercial trapping on public lands – which is our ultimate goal. So we went for common sense regulations such as:

On June 3, 2011 the Governor signed our bill, SB226, into law. Although it’s not everything we initially asked for, it is a positive development.

But it was a start and we went on to further legislative efforts.

Due to this bill, once again Nevada trap registration is mandated. It would seem obvious there cannot be trapping regulation if law enforcement cannot identify the offender. Trappers prevailed in 2015 to have this reversed, but we prevailed once again in 2017 and as of this writing (2021) the law still mandates personal ID or Department of Wildlife (NDOW) registration number upon every trap set on public lands. This was the most successful section of our bill.

But, the final language about frequency of trap visitation reflects the unjustified faith our lawmakers have in the Wildlife Commission. It also reflects insensitivity to wildlife, animals, compassion, suffering. Ultimately we were stuck with vague language granting them almost unlimited leeway to water down our intent. Phrases below in bold proved nearly impossible to define, and what followed was a year of wrangling with the Commission.

The history of this year of wrangling meant we had to attend meetings almost every month in different parts of the state – which meant uncompensated time and expense for us. This episode is a vivid illustration of government obstruction, obfuscation and machination. All we got were a few dots on the map designated for shorter visitation, and the rest of this vast state remains at the punishing 96 hour trap visitation law.

With the guidance of a seasoned strategist, and the assistance of the Center for Biological Diversity, and the resources of our newly formed Nevada Wildlife Alliance, we pursued four goals. Three were successful, whereas we were again unable to get shorter trap visitation times.