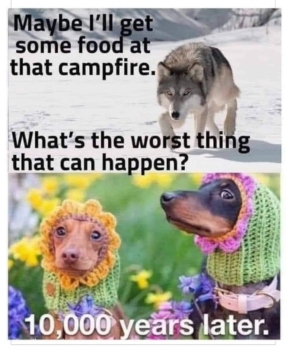 So, are we over-emotional tree-hugging bambifiers? Then what are those who have, for generations, denigrated, insulted, misrepresented, vilified, reviled, depreciated, and cast aspersion upon selected animals? Are strong negative emotions any more rational?
(We owe the term “Bambification” to Frans De Waal)

Reno Gazette Journal February 11, 2007: A steel trap snapped shut, pinching the folds of flesh on the retriever’s face. Owner Carol Grigus heard her pet’s yelps of pain and rushed to his side, horrified.

Carol Grigus’ outrage led to further organization and growth of TrailSafe Nevada. She is another co-founder. Here is her initial letter to the editor of Reno Gazette Journal:

I’ve been hiking the Galena Park area of trails for 15+ years, (I live across the highway from the Galena park) and have never come across any of these….I was taking a side trail West to the Jones Creek loop trail; stopped there and then turned around and came down…A short hike that I have done hundreds of times before, but lost the trail on the way down and had to ‘bushwack’ my way back down.. that’s when Duke got into trouble..He was with me the whole way, except when he must have smelled some bait….O gosh, I hope the bait wasn’t poisoned!!…….!  The Ranger wasn’t sure that this trap was in the park or not..

Before the ranger  came, I managed to untie the wire that fastened the trap to the tree there and we were able to walk with the trap on Duke’s neck…Later, the ranger arrived, released the trap and so we walked to my car together…Not 50′ from that trap I spotted another one….(the playing card attached to a wire above the trap) and showed her. However, we didn’t stop to inspect that one…Didn’t see any animal there….both traps were on a ridge of Jones Creek not more than an eighth mile west of Mt. Rose highway just north of the “north” Galena Park entrance…

Please tell me what can be done to avoid this “incompatible” use for such an area….OUTRAGEOUS that we even have to worry ourselves with this possibility in this location!!!!!!!

My children used to play hide and seek in this same area while growing up here…..with adults watching them!!!!!!!!!

My dog recently stepped in a trap while we were out hiking in the desert less than one-half mile from my house. The trap was set in an area bordering a road frequently traveled by equestrians,  while their dogs run off leash.  Unfortunately,  the trap he stepped in, and the trap next to it, did not have any identification on them.  I find this absolutely unacceptable.  First that someone would set traps so close to residences, and then that I am unable to hold the person accountable.

Trap registration allows Department of Wildlife Game Wardens to do their jobs. How can trap law be enforced unless violators can be identified?

Please make my comments part of the public record,  as I am unable to attend the legislative session tomorrow.

Thank you for your consideration. Debbie Tayler, April 6, 2015

And They Wonder Why We Object?

These are not the worst photos. But the shocking extent of the killing and the contempt for the animals is apparent. Sadly, elsewhere there are photos of little children with big guns, grinning beside piles of bleeding carcasses, and bloodier photos of even larger piles of bodies left to rot. This happens nationwide except where citizens unite to demand a ban.

Pile – As in how many you have killed

Try this next time you are in a grocery store. Proudly say to the person next to you that you just shot a big coyote and you will probably get a congratulation. Now proclaim that you shot a nice dog – let me know how that works out for you.

Tornado – coyote you shoot and spins before dropping.

Tornado with thunder – same as above with barking, yipping, etc.

Final salute – Tail wiggle a coyote does as it dies

Fur Rocket – One you missed and is running full steam

Tea Kettle – When you shoot a coyote and it stiffens up and just tips over dead. With steam is when it howls or barks as it dies.

Two Pointer – a coyote that has white on its tail.

Roadie – coyote spotted from the road, then shot