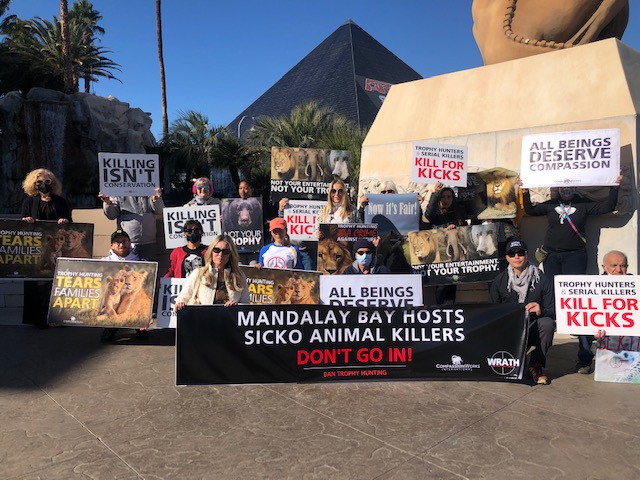 Stephanie Myers, former trial consultant, ballerina and teacher, is now retired allowing her long-time wildlife advocacy, spurred by her golden retriever’s severe injury after being caught in a leghold trap.

About two dozen protesters stood in front of Mandalay Bay Resort on the Las Vegas Strip to rally against the Safari Club International conference this past week (Jan 19 – 22).  Some conventioneers were disgruntled with our presence.  One taxi slowed down so the passenger could tell me, as I held a sign featuring a lion and the words ‘Trophy Hunting is a Crime Against Nature’ and ‘Killing Isn’t Conservation’, “Don’t you know that Cecil’s hunter paid $500,000…That’s conservation!,” and sped way as I retorted, “Oh, there’s a price tag on a life?”  Another walked by and kept repeating, “Get educated, you don’t know what you are talking about!  If you don’t have a hunting license, you are not conserving wildlife!”  These men and others stubbornly insist that the only conservation happening is through money paid to hunt wildlife.

But there were even more passers-by who raised their thumbs and honked their horns in solidarity with our message.

Law enforcement, with lights swirling, was with us, mostly Friday night when Don Trump, Jr. addressed the meeting attendees.  The officers stated that they were there for our safety and protection.

Next year’s convention is in Nashville.