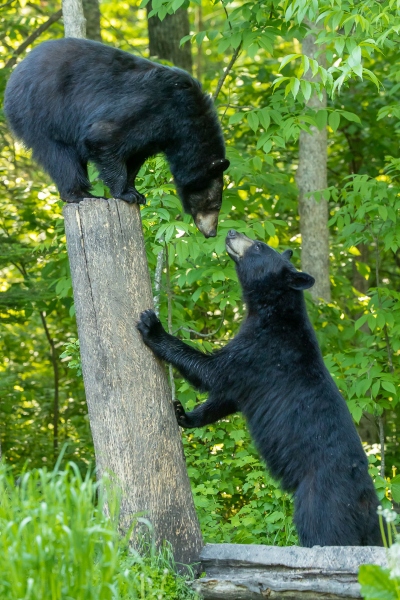 Opponents of the hunt question “the moral compass” of those in support of the hunt.

NDOW Director Tony Wasley defends himself and others who support the hunt by reverting to a “killing is conservation” stance.  He applauds himself and his cronies for the money spent on weapons and assorted paraphernalia used to kill these animals, all in the name of “sport.” He ignores the cruelty inflicted on the bears themselves, as well as the NV Wildlife Values Report (2018), funded by his own agency, showing that only 13% of Nevadans support the bear hunt in its current form, using packs of GPS collared hounds to chase these innocent animals to their deaths.

Meanwhile, far from the self-congratulatory Zoom Wildlife Commission meetings of like -minded hunters, NV Bears are scrambling for their lives.  Pre-season game cameras have been set by guides who profit from clients vying to win a belt buckle for the biggest trophy animal.  From opening day Sept. 15 through December 1, packs of GPS collared hounds are set to chase bears who are trying to pack on pounds in preparation for hibernation. Mother Bears are known to herd their cubs up a tree to safety and continue running as a decoy. Families can be separated in these chases, leaving cubs motherless.  Once the dogs’ signal shows they are no longer running, it is assumed they have “treed” the bear.  Driving mechanized vehicles, the hunters descend on the bear and kill it using high powered weapons.  The bear falls from the tree, often still alive, to the cheers and delight of the waiting hunters.

The traditional ethics of “fair chase” in this trophy hunt are hollow remnants of what has become a tech-driven war game played by those holding tightly to the delusion of a pioneer ethos long passed.

Groups such as Center for Biological Diversity, NV Wildlife Alliance, NoBearHuntNV, Wild Earth Guardians, Sierra Club-Toiyabe Chapter, the Humane Society of the United States, Animal Wellness Action and Bear Defenders submitted a letter to the NV Wildlife Commission requesting this year’s hunt be called off in view of the devastating wildfires. letter

“Wildlife which lived within areas now burned would have fled as the fire approached, and while some likely perished, some would be pushed to outside the boundaries of the fire, into foreign terrain and other animals’ territories. This forced migration of wildlife by wildfire will have broad effects on wildlife and trophic interactions in the areas receiving migrating wildlife. And with no refuge from the smoke and ash, these fires cause impacts to animal’s physiology.”

“Wildlife are sentient beings which experience fear, terror, pain, and grief. Surviving catastrophic wildfire, breathing heavy smoke for weeks on end, fleeing for one’s life and the lives of those they are responsible for – bears are suffering as much or more from the Tamarack and Caldor Fires as humans.”

What has been the response of the Wildlife Commission to this letter to date?

What response can one expect from a body majorly composed of individuals who so dissociate from the feelings of another animal as to kill it in the name of recreation.