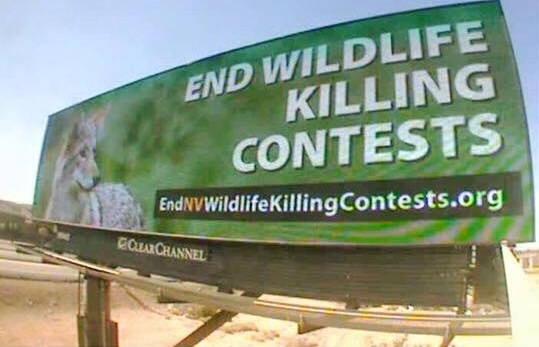 The question before the Nevada Board of Wildlife Commissioners (NBWC) on November 5, 2021 was whether to amend the state’s administrative code to ban coyote killing contests. The vote was 5-4 against banning these events, disappointing wildlife watchers. On the more positive side, this was the closest vote yet from NBWC on this question. Wildlife advocates have long objected to these contests as inhumane, unsporting and dangerous.

NBWC Commissioners distance themselves from the piles of wasted bodies dumped in the desert, because Commissioners identify themselves as ethical hunters. There is a glaring difference between controlled, regulated ethical hunting in Nevada and unregulated contest hunts. Much as they hasten to make clear they do not participate, five Commissioners saw fit to allow these gory events to continue. So what explains four Commissioners voting for the amendment? The answer lies in growing public awareness and condemnation of contest hunts. Per Project Coyote: “In 2018, Project Coyote and the Humane Society of the United States co-founded the National Coalition to End Wildlife Killing Contests, a growing coalition of more than 50 national and state organizations working together to bring an end to wildlife contests, derbies, and tournaments in the U.S. Together, they have successfully enacted prohibitions on killing contests in eight states: Arizona, California, Colorado, Maryland, Massachusetts, New Mexico, Vermont, and Washington.”

In the face of this growing public sentiment and activism, Tony Wasley, Nevada Department of Wildlife Director, said: (per Amy Alonzo, Reno Gazette Journal Nov. 6, 2021) “Hunting should not be a competition. . . If it’s not good for the image, it’s not good for the future. . . My biggest fear around this issue is for the future of conservation, for the way we, as ethical sportsmen and women, are viewed by a changing society. . . ” And it appears four Commissioners agreed.

Activists have repeated our objections so often in letters to editors, in testimony, in emails to NBWC, in proposed bills, and in an earlier edition of this newsletter Also, comprehensive information is posted at Project Coyote. To spare repetition, the litany of the many reasons to ban these contests is not repeated in this report. To take action, Project Coyote presents a petition and a host of ways to join this nationwide movement. To help the effort in Nevada, alerts will be posted in this newsletter as they occur.

Unlike some of our previous efforts to ban killing contests, the 2021 hearings got excellent media attention. Refer to these for thorough coverage of the hearing:

In September, 2021, the Reno City Council joined animal advocates and other Nevada public bodies in the condemnation of wildlife-killing contests, a long tradition in the Silver State. “These contests are heinous, animal cruelty issues,” said Reno Mayor Hillary Schieve.” “We will not tolerate cruelty to animals. These contests are inappropriate.”

Earlier, in March, 2021, the Clark County Board of Commissioners issued a resolution supporting a ban on wildlife killing contests.

There is no middle ground with this issue. Since our initial petition to NBWC in 2015, another hearing in 2016, and NBWC deliberations on March 20, August 6 and November 5 of 2021, wildlife advocates have gained determination and public support. The problem can be viewed as a culture war in which NBWC does not reflect morals and values of current day Nevadans. These values are too precious to compromise. Will the legislature be more receptive?

Sadly, time passes, spent in debate, while coyotes and other vulnerable animals pay the price.