Beowulf Trapped on His Own Ranch-Three Trespassers Deny Involvement 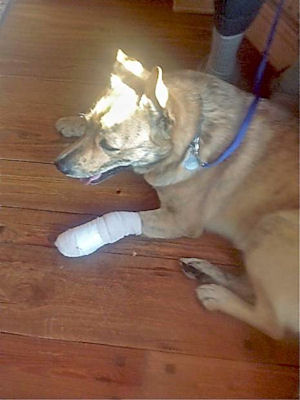 “The first Saturday after Christmas I took my employers two family dogs, Beowulf and Raley, out for a walk on their private property. The dogs and I hiked to one of our favorite spots. On our way back on the familiar trail, I suddenly heard the horrendous cries of Beowulf just a short distance off the main trail in the brush. It was not far from Foothill Road near a spring where the dogs often stop to drink. I called my boss and screamed for her to come as I tied up the other dog and took off running in the direction of the dogs cries for help. It sounded so ferocious; I was sure this two-year-old male dog Beowulf was being torn from limb to limb by a wild animal. When I had him in sight, I realized his foot was in a large black metal trap attached to a chain with a 3-way style barb on the end of it that was tied further off in the distance to a tree.

Beowulf, with his bare teeth, was frantically and helplessly trying to extricate himself from this horrible trap’s grip. The only thing to do was to throw myself on top of him to force him to stop pulling and biting at the trap. His efforts to release himself were only causing him to bleed and suffer more. It was the most horrific sight and the worse pain I’ve ever witnessed an animal in in my 51 years.

Never having seen a trap myself, I had no idea how to get it off, only what seemed like common sense at the time to at least try. It didn’t work. My boss Judy arrived, tried to get it off and was bitten in the process as the dog was in such horrible pain and was simply fear biting and difficult to hold down. Shortly after that, a man appeared with a gun. Judy and I were alarmed at first thinking he might be the trapper and asked “who are you, and why do you have a gun…this is private land”. He said his wife had heard my screaming and so he came running, thinking it was I who was being attacked.

My boss Judy called 911 and was told there was nothing they could do. The man who arrived with the gun could not get the trap off the dog’s foot either; none of us knew how. It took a good hour or more before animal control arrived. Apparently, there was no one else to call to come and help. When a woman named Liz from animal control finally did arrive I asked if she could get the trap off. She said she couldn’t guarantee it but would try. Having already tried so many times and not wanting to further hurt the dog, I was surprised to realize she did not have a way to tranquilize the dog. What she did have was a muzzle, which Judy was able to put on the dog as I held him down. Thankfully, and due to Liz’s willingness and skill, she was able to release Beowulf’s foot from the trap and we carried him to the vet.

The Vet said that Beowulf was extremely lucky. He had chipped bones and broken teeth as well cuts and bruises but in time it would heal. I realized how truly lucky he was because had the trap caught his foot or leg in either direction up or down, I doubt he’d ever be able to walk again. The vet assistant, Carolyn Hernandez gave me a ride home (my boss was in the emergency room getting stitches for her hand). Carolyn described how common this was becoming. She said several domesticated animals from the surrounding area were coming into their practice much more frequently as a result of having been caught in traps. One of the dogs she mentioned had to have his foot amputated and another lost all his toes. This made me realize this was a problem happening to others pets in the area as well. The trauma this has caused for anyone involved namely Beowulf, Judy with her hurt hand, and myself, with cuts and bruises, I can tell you is no small thing.

Beowulf had a very lucky ending and is miraculously going to be ok. But the situation has led me to think of several questions I would like answered: is their anyone overseeing and or enforcing the law that says it is a federal offense to trap on private land? The game warden did tell us when he showed up the next day that putting a trap on someone’s private land is in fact a federal offense and open to criminal prosecution as it very well should be. What else do we need to know about this law? As it turns out, trappers used to be required to have numbers on their traps so they could be identified. Apparently, they no longer are required to do so thanks to the local ordinance being changed. Why is this?

Three days later on the afternoon of December 31st, my boss got a tip from a neighbor on the lookout, that there was a truck just past the “No Tresspassing” signs on her private property. When she got there she found three men and asked them what they were doing on her property. They told her they were quail hunting though they were all carrying pistols and didn’t have quail hunting guns. She said, “Are you the ones who have been trapping on our land? Our dog got caught in a trap recently and was hurt and so was I“. They said no and quickly left. Judy then called the game warden and gave him the license plate number. The game warden said that he saw that same truck down on Jacks Valley road and confirmed that they were in fact trapping that day. Judy rushed over to her daughter Leah’s house on the same property and together they called 911 and went in pursuit of the truck. Judy and Leah tracked the trappers down on Kingsbury Road in an area where they could have re-accessed their private land. The police and the game warden arrived and issued a citation and wrote up a report on only one of the trappers. His name is John Helming. Apparently the law says that when you trespass on private land you are not arrested and that it is up to the owner to prosecute. This man pretended to be very apologetic, swearing there were no more traps and stating that he would pay for Judy’s medical bills (she spent several hours in the emergency room getting stitches) and the vet bill too; but begging all the while to not have his name put in the paper. A little while later, the game warden came to the house and said and I quote: “Well, you know, this guy is truly sorry so maybe you should just give him the benefit of the doubt”. I have to say this attitude troubled me because this man knew he was trespassing when he went right by the “No Trespassing” signs, and then further lied about being there to hunt Quail. Clearly, there was absolutely no benefit of the doubt to be given.

The next day we found another trap staked to a log not far from where the two other known traps had been. The disturbing reality that has come out of this experience is that we have no way of knowing if there are more traps and we are now afraid to walk on property that is supposed to be private and safe. If someone walked in your yard and tortured your animal, what would you do? This is no different, in fact it’s actually more brutal precisely because it is so hidden and difficult to prevent. But that is exactly why we must change things. We must ask ourselves if we are willing to allow this to continue? We must hold accountable trappers who are illegally trapping and breaking the law as well as those who are sworn to enforce it.

Think about if any one of us got caught in a trap ourselves somewhere? What if we didn’t have a cell phone with us when we were out for a walk and this happened to our child, our pet or us?

I hope the community will come together on this subject, first to ensure the general public is made aware of this very real danger and secondly to get behind some kind of action we are willing to take to stand up for our rights.

I would like to suggest a community wide meeting of all the people who have pets that have been caught in these traps whether on private land or in frequently visited public areas such as hiking trails where people go with their children and their pets. At the very least, these trappers need to get the message that we will not allow them to endanger us. I would like to see communities help in reporting these crimes and looking for the criminals who are perpetrating them on us and our animals in our communities; and in general to make the unsuspecting public aware of the very real potential for danger.

And then lastly of course, to make sure we create the type of environment where we each have the others back, report anyone we know or suspect of this illegal trapping and keep our eyes and ears open to people being on land they shouldn’t be on. We wouldn’t have caught the guy without help from our neighbor.

The bottom line is trappers who are trapping illegally and close to public access lands with trails, are not just torturing helpless wild animals anymore, they are also putting our lives at risk. The community deserves to know who these illegal trappers are. Their names should absolutely be printed in the paper and they should be prosecuted to the fullest extent of the law.