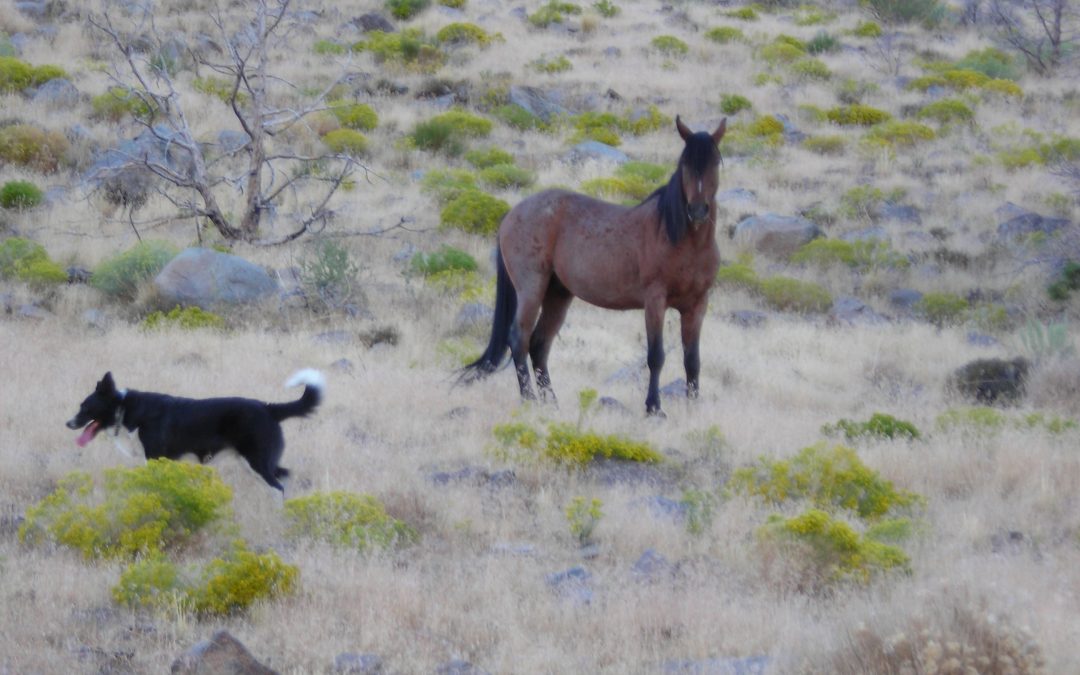 10-6-06 Friday
Clowdy
At first I thought the dark shadow was a tree on the hill. But it kept me guessing and drawing closer. The mind takes a while to catch up to the eyes. As Roger, Sadie & I drew closer on the Foothill Path, it was clear; I wasn’t hallucinating; it was a horse standing alone on the slope.

Not much happened that first day. We passed him in silence. I was awed; the dogs seemingly didn’t notice. Was there a herd nearby?

Evidently no herd. He was out in the same area day after day. On the second or third encounter, I wasn’t surprised when Sadie gave chase. He ran away, but no further than he had to. This guy was loose, no bridle, no fence, no rider, just running, free-style. Every few bounds, he would kick at Sadie. She managed to stay with him with her snoot inches from the hooves. I had to be proud of her; dauntless, my alternative school at-risk tough kid. Every stunt she pulled had a “Here, hold my beer” quality. Roger just watched.

This became a routine over the months. Sadie chased. Clowdy hung around. He had friends all over the hiking range, respecting his solitude; nobody turning him over to the authorities; establishing a place alongside the dusty dirt road where we all left hay for him.

I’d see other people on the trails once in a while and , yes, everybody knew him though only I called him Clowdy. Carol was interested so we got a few bales of hay and left them at the feeding station. He wasn’t there, but we found him a short walk to the south, in the shade of a juniper grove. Shasta didn’t do anything and, neither did my dogs. Carol, being Carol, said we should go up to him and pet him or whatever. I said he wouldn’t let us get close to him but she said he would because he’s a domestic animal after all so I held back while Carol tried to sneak up on him. Clowdy didn’t run or panic. He just kept backing off and established a perimeter about six feet around himself which she had to acknowledge.

I think he was around for about a year. No idea where he went eventually. I always feel good about him; he kept his cool and his independence a long time.