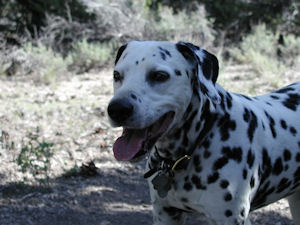 To whom it may concern,

On July 24, 2004, my husband Rob, myself and our daughter Jade went for a hike on the terraces at Ward Mountain.  We drove to the terraces via the Lion Springs road and did not see any postings for government trapping; it was posted on another access road but not the one that we used.  When we got to the terraces we went on our hike on the main road and about 10 minutes into the hike our dog Dice got his foot caught in a trap that had been set 5 feet from the roadway by a government trapper.

He was howling in pain and I had to try to hold him while he was biting me so that my husband could remove the trap, I physically could not have removed the trap by myself.  We were all very traumatized by this event and could not believe that a government trap would be set so close to a public roadway, what if a small child had stumbled on to this trap?  These traps could easily brake the leg of a small child or domestic dog.  What if a family was driving or walking on this roadway and a wild animal had been caught in the trap and they had to witness this torturous, painful event?

My husband contacted the agency responsible for this careless act and was told that it is illegal for government traps or commercial traps to be set so close to a roadway and that they would be removed.

We would like to hike in this area again but have not returned in the seven years that have passed because we are still traumatized by what happened and too afraid that our dogs will get caught in a trap.

This type of illegal trapping practice should never be allowed to happen, traps should never be placed in an area where people, children or domestic animals are present.

I have included pictures of the trap and its proximity to the roadway.