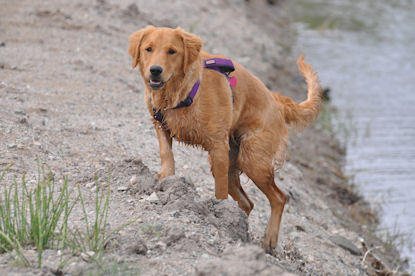 I recently lost my beautiful Golden Retriever to a full body animal trap that was set next to the Walker River bank. I was walking with my dog along the same route as I have for the last two years when her life tragically ended when she became entangled in an animal trap that had been set out for beavers. I watched in horror as my beloved Golden Retrievers life ended right in front of my eyes, despite my efforts to release her from the grasp of the iron trap that had snapped around her neck and head, squeezing the life from her by suffocation. My frantic efforts fell short of her release and I too was severely injured, my right hand thumb and hand received deep lacerations that required multiple stitches to close. I was also told by the ER Doctor that I may need further treatment by surgeons to repair the damage done. I was never able to release the grasp of the trap by myself, I had to call for help, and it took two young strong lads to pry the trap from my lifeless dogs neck. -Gary Park [ Conibear-type traps are impossible to open without special training. They are set in shallows to catch beavers and muskrats. They are almost always lethal.]