Keep Your Dog on a Leash So They Won’t Get in My Traps! 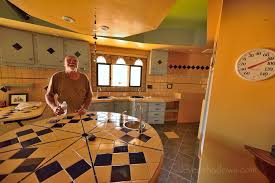 February 1, 2011Personal email: [Message from Randy Johnston who created the unique Hard Luck Mine Castle – a must-see phenomenon in the Nevada desert not far from Death Valley.]

First I must say its great to get some kind of response from persons that have the same problems with trappers and the same out look on the subject!

Getting up this morning and looking at your email was the best cup of  coffee I’ve ever had! You must excuses my writing I’m poor at that so bear  with at times.

In the last 12years I have had 3 dogs that have been in traps.the first  dog was in a trap over 3 days and covered all the area looking for her  with no luck and had to leave on a road trip on the last day. Just when I  was leaving the trapper shows up with my dog with her front leg almost cut

off and then says keep you dog on a leash so they wont get in my traps!

That’s when I first found out they aloud ed trapping. Well went through  Vegas to a vet and the leg had to be removed at the coast of $800.00 out  of my expense not the trapper. This dog was only 7 mon.old so she spent  the rest of 10years on three legs and could run like the other dog I had.

Then camping buy the Belmont area let my Basett dog out in the morning I  was the only person camped and he go cout in a trap and I heard him and  got him out in time before to much damage was done. The traps were all  over the area close to the camp site!

I live on 40 acre of land on Gold Mt. I’m the only home on the Mt. And the trappers always set there traps all around my land so my dogs smell the  sent they put out and then leave to check it out and yes get in a trap!

I’ve asked if they could move there traps a mile or so away so my dogs  won’t get in the traps flat refused said they can put them any were they want !but at the same time they have hundred of open Mt. Area around this  area.

This year lass month my new dog didn’t come home at dinner time so went  out on the A.T.V in the dark looking and stopping and calling and could hear her some were out there! After two hours I found her in a trap with a  very large weight on the trap that she had dragged more than one quarter

mile trying to get home! It took her over a wee before she could get around.

Then about a week ago my Bassett didn’t come in at dinner time and went  though the same looking all over the area and never found him! The next  day was going to town and ran accraoss the trappers down the road from my  home and they had the Bassett in there truck he had been in there trap all

night and the damage is so bad to the joint in the leg that I think heal  never be abel to run again. That when I got into the trappers to move  there traps a mile down the road and they said NO!!! We can trap were ever  we want!!! These persons are the most arigrent people and don’t give a

damn about animals and what they do to them! All they want is the $$ from  the state or how ever pays for the skins!

What’s the worse thing is how the animal dies,first they get in the trap  and spend 3to some times 5to7days in pain and then comes along the trapper  and he doesn’t shot the animal he clubs it to death (to cheap to use a gun  it mite coast $)

I’m very interested in helping were ever I can on stopping trapping!