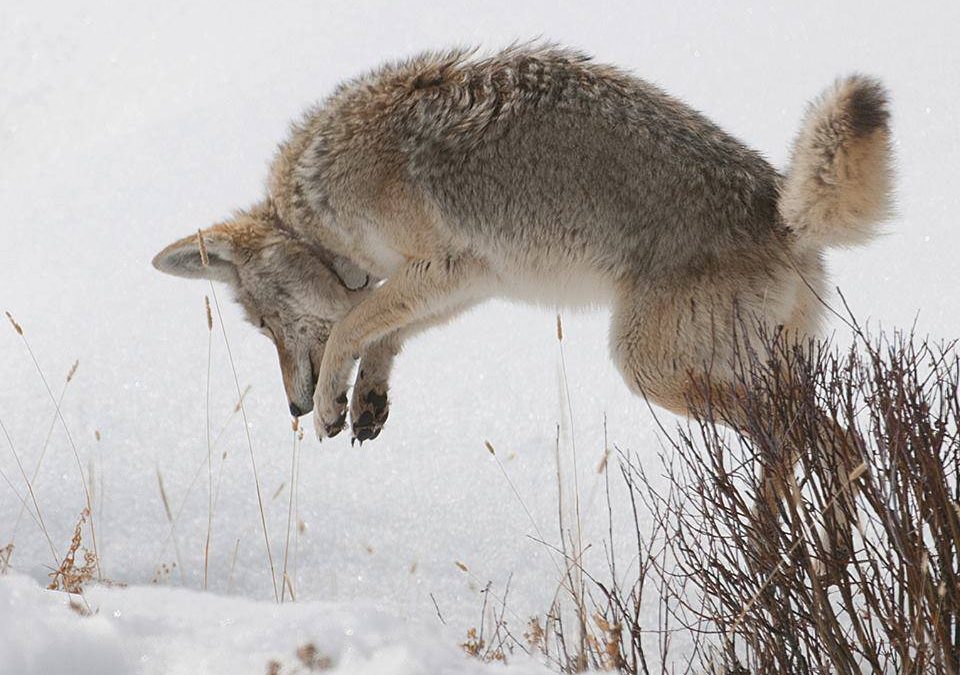 Visit Project Coyote for perspective and facts about America’s Song Dog. No, he won’t eat your children. More likely, he or she will play with your big happy goofball Golden/Shepherd. In my experiences, the female is the player and Coyote Dad is the sober gatekeeper. I treasure these encounters, each so unexpected. From my experience, coyotes are unpredictable which makes every meeting new, fresh and amazing.

April, 2004. Up the steep hill. A Jeep there chugging up the almost vertical dirt trail. Two kids. So proud of themselves for making it. We cross the summit and head down the north slope; I see a coyote run across the hill. It’s the longest I’ve ever been able to track one because I’m up so high.

Off to the west somebody is shooting. The coyote runs in that direction. I’m powerless; all I can do is hope he dodges the bullets. Most likely the shooter would love to put an end to all that beauty and independence.

Now I wonder. Where is Roger, my German Retriever Golden Shepherd? He was here a minute ago. Is he in harm’s way? Has the coyote somehow lured him into the bullets’ trajectory?

Around the belly of the hill emerges another coyote in full flight. This is the closest I’ve ever been to a Medicine Dog. Three or four coyote lengths behind streams Roger, closely tailing the wild cousin. Is the coyote holding back to keep Roger in her wake? There is a venerable and durable myth that coyotes lure dogs to ambushes where the pack lurks to devour the pet.

Roger has chased them on several occasions and always comes back sooner or later with his grin intact. But could today be doomsday? “Nice knowing you, Roger,” I whisper.

It is not doomsday. The shooting is louder and the bullets are coming faster, and they were heading right for it, but they have stopped somewhere near the crest of the hill to the west. Roger turns toward me.

The coyote stays behind on that slope to the west of us, and starts persistently barking at Roger. It’s a combination of sharp yips and high-pitched, thin barks. I don’t sense aggression. I sense that she wants him to come play some more. And who wouldn’t?

Roger doesn’t look back at her; nor does he look concerned. He just lopes on back to me, probably tired. He’s a sprinter, not a marathon man.

The coyote watches us with her yips and her barks for a long time, standing motionless, downhill and across the dirt road from us. Then I’m surprised to see her mate come quietly up behind her. He joins the yipping for a while. He makes it clear the yips are coming our way and he’s telling us fun time is over. He makes it clear where the line is drawn. This goes on for a while, then they both fall silent and disappear over the crest of the hill, heading west.

Now Roger and I traverse our way down the steep slope, avoiding the tightly packed roadway where I might slide, instead digging heels into the soft turf of the hill.

Now two Jeep loads of young guys are going up the steep hill right beside us where we’ve come to rest under a bush. This is the most action I’ve seen up here in 15 years. I thought the earlier Jeep would surely be the end of today’s traffic. This entire hillside is almost always all mine. Now the bad luck; to be squatting under a bush, with two Jeeps a few feet from my elbow. I hold the big dog by the collar so he doesn’t get mixed up with the vehicles, He struggles and heaves, still charged up by the coyote incident, and almost drags me toward the road with him.

Instead of going on and getting past us, one of the Jeeps stops right there, next to Roger, the tree and me. Words erupt from me: “Get out of my space!” I might as well be the coyote, yipping at him.

To my chagrin, the Jeep sides are open and the driver hears me:”Hold on a minute! I’m stuck.”

He finally gets the white Wrangler moving again.

After the Jeeps pass, the coyote re-appears; now she is east of us; I have no idea where she crossed the road; she darts from behind a rock pile. Roger again gives chase. They are gone for a while behind the rocks. Maybe this is it; now the evil drooling wild pack awaits to tear him apart. But somehow I doubt it. All my instincts say they’re just having fun. Her disapproving spouse isn’t around. More games.

Roger does come loping back to me after a while, to lie panting at my side. I see her briefly, then she is gone, to rejoin her guy.

If you want to share the open country with a dog, I’d say get a dog who can take care of him/herself . And the dog doesn’t have to be especially big. Roger was just 65 pounds. But that was 65 pounds of utter confidence and an unswerving belief that he owned the world and everything in it. Sadie was just 60 intense pounds. She was a survivor with well-earned street smarts. She had at least three placements and a stretch on death row before I adopted her. Coyotes, at least those I’ve met, respect such dogs.

The coyote is still around, watching us from behind the rocks.
As we descend further along the path, we see her once more, again with the mate. They stand together looking at us, about eight feet away. He barks and yips and makes himself well understood: ” This is it, now. You had your fun. She’s my mate and this is my hill, and you can just keep moving.”

Another time, another hike, it was my grimly serious Sadie, and there wasn’t any playing. I had been leaning against a log, watching birds. I turn around after a while to see a perky little female coyote inches from my backpack, probably lured by the Clif bars within. Where’s Sadie? Snuffling around several yards away – oblivious. At times she goes ballistic on other dogs, but I’ll never know why this wild being didn’t interest her.

I stand up, pleasantly surprised. Yes, the coyote experts tell you to “haze” them away, but this was so clearly not a confrontation, just a visit. I stand and she and I walk back to the brush where Sadie is busy digging. Will they notice each other? Not much. The little wild one stands up to her ears in brush about 2 feet away from me and equally close to Sadie. She fairly glows with her bright, curious, cute and perky expression. I walk back to my log and that’s the end of the encounter. I watch her mate from a distance. He is outdoing himself with technique, crawling on his belly, slinking around. After a long interval of being observed, he comes nearby and stands guard over some thick brush which must be their den. He barks at me and gives me the look and I know fun’s over and time to go. I oblige and, for once, Sadie comes along without an argument.