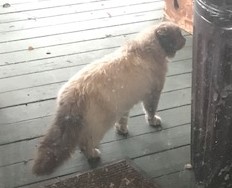 He’s been around for a few years. I can’t remember when I first saw him. My office is in the basement where I face a ground level window as I work. Over the years, a procession of animals show up, peer at me and I peer back, usually both parties with great surprise. The window is unconscionably dirty, but here it is:

The most magical meeting was in 2011 as I prepared for a legislative hearing about commercial trapping. It was sometime at night and a raccoon, my spirit guide animal, was there staring at me. We did prevail at the hearing, further proving that this particular raccoon was a messenger from on high.

These days the traffic is mostly Robert, who floats by at sunset, also a smaller black cat I call Puma, and a muscular tabby I call Meena. I’ve arbitrarily assigned genders to these beings.

I call him Robert because he’s almost as big as a bobcat. Clearly somebody is feeding him; he’s been this size for at least three years. He appears to make the rounds in the neighborhood. I don’t feed him, but he’s around so much that when night temps dropped, I worried about him and gave him a pile of blankets on my back patio. Sometimes I’d see him out there, but also the other two. I think they were sleeping in shifts, sharing the blankets.

This winter it was obvious from clumps of hair that he was hanging out on my porch furniture. I gave him a rug, a fleece jacket, a flannel sheet and a cat bed donated by a friend. Didn’t seem he used it much. Yesterday morning it was all dumped on the patio floor as though he had made a hasty departure and kicked it all away. Haven’t seen him for a day, but that’s not unusual.

Update June 21, 2020. Haven’t seen him in months. From vague posts to our neighborhood Nextdoor website, I suspect somebody made a pet of him. Puma helped herself to his territory; I think she nests in the rabbit brush on the south side of the yard. She cruises by the window as Robert did, but she’s far less interested in me than he was. Whenever I enter the yard, she jumps over the fence – she clears six feet in one jump every time.

Although I highly approve of the TNR program (Trap, Neuter, Release) and even volunteered briefly, I don’t want to be nanny to all the neighborhood cats. For those who don’t know, Trap, Neuter, Release (TNR) is a program by which feral cats are trapped, spayed or neutered,vaccinated, and then released into the environment. Left ear is cropped to show a cat has been through the program. Rather than immediately reducing numbers through removal, TNR practitioners hope to slowly reduce populations over time. The trapping is not remotely like commercial cruel trapping. Rather, the traps are box traps. The TNR volunteer monitors the traps, puts a blanket over the trap once a cat enters, to keep him from panic, takes the cat to the shelter where he/she is sterilized, then released back to the neighborhood. TNR programs include a neighborhood volunteer caregiver who oversees the welfare of local stray or feral cats.