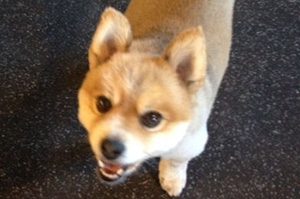 Telephone Conversation May 3, 2015 and subsequent emails

I was returning home from my morning walk with a neighbor and my dog, Rocky, on Friday, April 17th, between 9 and 9:30 a.m. Most of the lots in this development are one acre. This lot is narrow and long, gaining access to the Carson River. My backyard is fenced, with a 20’ side yard between my home and the fence line, shared with the neighbor.

As I approached the street entrance of my driveway I heard what seemed to be an animal in distress. After taking a moment to determine if it was bird or other, I felt it to be a cat in trouble. I ran to the front door of my neighbor’s and received no response. At this time I moved quickly to gather tools and remove enough of the six foot tall fence boards to gain access to the side yard of my neighbor to assist the animal. It is not unusual for cats to roam in our neighborhood. I have had cats enter my house through the doggie door, as one in particular would rest on the dining room chair, noticed on several occasions. Another time much of my cat’s fur lay on the dining room floor after an indoor battle, detected after returning home one evening. This is when I decided to get him a buddy, and beef up the clan. There is not a leash law in the county, though it is rare to witness dogs roaming freely, without an owner close at hand.

The area that I was opening is approximately 800 sq. ft., and the fence line is 20 feet from my home’s north facing wall. In this fenced area, separated from his backyard, he has erected two rows of solar heating arrays that run most of the 25 foot length enclosure. I would guess the panels to be set at a 45 degree angle, and I could not identify the reason of urgent cat cry from the now open fence.

I dropped flat to the ground and crawled under the pool heating structures, to observe that it was one of my two cats. The weeds and underbrush made it difficult to know what had trapped my cat, until I was under the second array, in which I could understand that it was a foot trap. I was able to release her, and kept a distance to observe her gaining safety within my home. After closing down any outside access, I returned to the fence to retrieve my dropped phone.

As I lowered to the ground this time, I noticed my dog, Rocky, flat against the ground, and I could not understand what he was so intent on. Again, the understanding was not clear until I was under the second row of panels, and I saw he was crushed by a second trap. I called my other neighbor, who in turn called 911. Deputy Mike Mathews, with Churchill County Sheriff, was the first to respond. He waited to enter the property, until making contact with the owner, who was out of town for a few days. The Deputy then contacted animal control, and fish and game. I requested to have my dog home, and the deputy confessed that neither he, nor animal control knew how to release the trap.
My brother-in-law said that he would do it, so a call was made to the owner requesting permission for my brother-in-law to enter and get Rocky. I later spoke with my brother-in-law, Darrin, to be informed that there were a total of four traps. One live, two foot traps (a #2 and #3), the fourth being a conibear-type, all secured to the same stake, and a can of cat food used for bait. My cat was trapped in the #2 foot trap, my dog killed in the conibear. I do have a case number and my understanding is that it has gone to the District Attorney to determine what the trapping rights are in this situation.

Mike, the Deputy on scene performed follow-up calls and visits to my neighbors and family involved, and let me know during the visit that there is much “grey” area in the laws of trapping. My animals were trapped on Friday, the neighbors returned home on the following day, Saturday, to stage an evening party for their newly wedded son. I stated some of my opinions before and during the party. He stated that “he could call the sheriff, or we could talk about it the following day.” He never made contact the following day. Very tall A-frame ladders and a bright flood light seem to gather the attention at an outdoor evening congregation of people. ; )

I have lost two deeply loved cats in the last year, and each time I have taken a photo of the felines, with my contact information on back. Never has this neighbor indicated a problem with animals, nor alerted me that he had set traps that would endanger my loved ones. There were no warnings, verbally expressed, or printed and posted.

Hey Trish-
You most certainly have my permission to use the photos I sent. I hope that the loss of Rocky and the injury to Topaz will aid in awareness to the cruel and “grey” areas our laws allow for trapping.

Topaz has lost three of her four toes. Her body discarded them over time, and they were removed with the first two dressing changes. I must say that I feared the worst for her foot, as the odor of dying tissue under her soft cast was quite strong for several days, which cleared after the second cast change. I think the vets (she was seen by 3 or 4 different doctors during the 5 trips) wanted to see what nature chose to remove, then they went in to aid the process and get a thorough inspection while she was under anesthesia. She still prefers to move on three feet, and pulls that back paw under when she is moving quickly. I was informed by the vet that she will have nerve sensitivity for awhile. I had lost a small amount of a finger tip 10 years ago and am just getting used to sensation with that digit. I can only imagine what discomfort her whole foot is going through as the nerves regenerate. She has the large (landing) pad, so that is a plus for her active life. I witnessed her go after a cat that came into the yard last week, so she has little fear for a cat challenge with her injury. The surgery brought her total medical bills up to $475.00, and I expect that is about it for Topaz’s severe injury. My neighbor has not spoken to me since all of this tragedy was revealed.
I know that I released Topaz from a foot hold trap. My brother-in-law claims that the size is a #2, the smaller of the two foot hold traps that were set on the property.
Best always-
Celeste