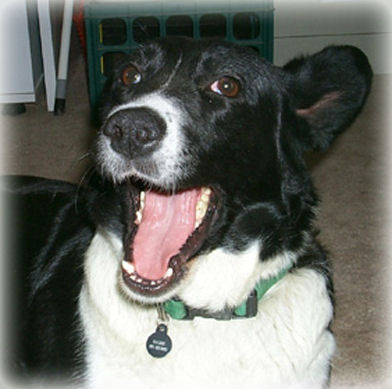 It may look like she’s smiling. She’s not because she never smiled. It’s a yawn.

She made a fool of everyone
Sexy Sadie

However big you think you are
Sexy Sadie

What makes us decide to set out one day and get a dog? Forces greater than ourselves of which we are only dimly aware. One day I decided Roger needed a pal. He needed somebody to body slam when he ran like a cannonball across the beach. I concocted a theory that he had a long-lost brother, not unlike Snoopy. Like most of my dogs, Roger was a behavior problem. Roger owned the world and everything in it. To jump on person or dog, to hump, to body slam — why isn’t everybody as happy as I am? Up and down the trail, hikers fought him off, sometimes threatening a good solid caning with a hiking pole. But more about him in a later blog, now on to Sadie.

The Wylie Animal Rescue Foundation (WARF) had some appealing photos, so I took Roger up to Kings Beach for a meet and greet. I didn’t know until now, all these years later, that WARF rescued animals from the euthanasia holding rooms of local shelters – death row inmates.

Connie Nowlin , who I believe was director at the time, arrived soon. We were to take walks with Roger leashed to me and the little ex-convict of the day leashed to Connie. The first two candidates were a total bust. I can’t distinctly remember one of them. The other had looked pretty good in his online photo which was a face shot which did not show his body. But in person he turned out to be a cringing, skinny, semi-Afghan type with long, thin, droopy hair. The type Roger would bully into a corner. A short walk with me almost falling to my face on the rock-lined hilly path, trying to hold Roger back, was a deal breaker. The underdog stayed close to Connie and there was no interaction with Roger.

Back to the shelter, we strolled down the line of cages and a black and white caught my eye – not because I saw any particular virtue in her, but because black and white does capture the eye. After the long drive up the mountain, I didn’t want the trip to be futile. I requested another walk.

“That one?”Connie was aghast. Masking her incredulity, she leashed the animal and we went back outside. The minute we cleared the door, the two dogs turned on each other in snarling fury and a tangle of leashes. I know better than to intervene in a dogfight and I have the section of thigh enhanced with scars, to remind me not to stick a leg between two dogs in full combat mode.

I’ve been around for plenty of these introductory bouts. They happen when two dogs meet and the first order of business is to decide who is alpha. It’s usually over in a few minutes with no real injuries, and once is enough. If their people can’t stand by and let them work it out, and get agitated, the people will turn a formality into a worse fight.

Connie was visibly distressed. I was delighted. This dog had what it took. They stopped tangling after a while and the walk progressed. Turns out she was named Sadie and that was Sadie #4 because it’s such a common dog name. I only found out later she’d had at least four placements and the last had been death row.

We decided not to attempt driving home with both in the car, so I agreed to pick Sadie up the next day.