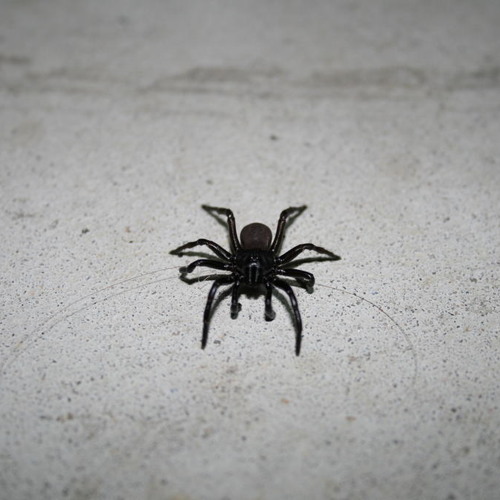 This was the farthest I’ve ever gone to avoid killing an insect. The insect in question looked more or less like the featured photo here. She or he was black, small, and a quick scuttler.

This time it was my kitchen sink. She or he was just sitting on the rounded porcelain surface in inert spider fashion. So we can presume she/he had somehow come up from the drain and made it to high ground. But the slope was too slick for actually getting out of the sink.

OK to make this tale easier to tell, I’ll have to assign a name. Let’s assign her female gender and let’s call her Fabulosa. “This time,” I told myself, “I won’t screw up.” Past screw ups haunt me – so many pitfalls – the phone rings and you come back and can’t find the spider again – you grab a plastic container and try to scoop the little victim up and brainlessly crush one of its legs – not this time. It’s a quarantine Saturday morning and time is endless – do it right for a change.

So I impulsively grab a plastic container and edge Fabulosa up the incline. She tries desperately to get some traction, but she can’t and keeps sliding back down. In Buddhist teachings, we learn about skillful vs. unskillful means in one’s efforts to be good. The container was unskillful and Fabulosa ends up on the tiny rim of metal around the gaping drain.

I deliberately take some time off to calm down and avoid unskillful repeated efforts. It’s imperative not to let her plunge down the drain. Luckily there is a plastic bottle cap about the right size to cover the drain, so I put it over the opening and chase Fabulosa around and around her little level space with a plastic spoon. She’s not having it. she scuttles just far enough ahead each time, so eventually I let her be.

Now we’re getting somewhere! I’m bolder with the spoon this time, nudging her around the cap. Can’t catch her; she disappears into the tiny gap under the bottle cap and she’s gone. There goes my karma. And hers.

OK. She got up the drain once without human unskillful interference. So on the desperate hope that she might do it again somehow, I make her a paper towel bridge so she can get traction.

With the elation and relief that come from innovation, I’m sure I’ve got it this time.I remove the cap so she can get out of the drain and back to her safety ridge. Then get her onto the bridge. One is shown here with the cap still in place; but I laid down four all around the cap. which I don’t have a photo of. Distracted myself for twenty minutes. She was back, not even breaking a sweat. Fabulosa! I should have just left her to her devices, but couldn’t resist showing her how wonderful the bridges were. Somehow I got her flipped onto one, about three inches away from the drain. Now we’re in business. But how can she ultimately get out of the sink? A big plus: this has taken up almost an hour of quarantine time. And she’s plunged down into the drain once since I started helping her.

Another inspiration: she needs a rescue towel to lift her up and out. I set it up and go away. When I get back about twenty minutes later, she’s gone. She left her cushy paper towel and fell down the drain again. Emotions take another roller coaster ride downhill. I take away the plug and give it up for the night.

In the morning, she’s on the towel! The Universe gave her three chances. I carefully transport her, towel and all, to the Christmas cactus where she’ll live the good life. Congratulate myself all morning.

So what have we learned?
1. As Winston Churchill said: Never, never, never give up.
2. Spiders can learn
3. Always have a towel