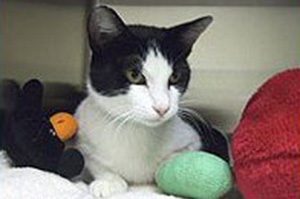 On Sunday, August 22, 2010 another cat was found in a leg-hold trap, this time in Golden Valley. Now named Trapper Jane, the two-year-old black and white domestic feline, was caught in a leg hold trap and picked up by a Washoe County Animal Services Officer. After being treated at a local veterinary clinic and finishing the five-day legal hold period for stray pets, she was transferred to Nevada Humane Society on August 29.

Her crushed toes were amputated Sunday morning at the NHS clinic and she will be under veterinarian care at NHS for the next month. Her recovery will require ongoing wound care and pain management, but she should in time be able to walk and become available for adoption.

Five months ago, another cat was caught in a leg-hold trap in Cottonwood Park. This cat, later named Trapper John, was discovered partially submerged in water and struggling to free himself from the trap. Though hypothermic and injured by the trap, Trapper John was saved by NHS veterinarians.

Nevada Humane Society appreciates donations toward the veterinary care and treatment for Trapper Jane. NHS is located at 2825 Longley Lane in Reno and is open for adoptions daily from 11:00 a.m. until 6:30 and an hour earlier on Saturdays from 10:00 am. To make a donation or obtain more information, visit www.nevadahumanesociety.org or call 775-856-2000.

Trapper Jane was adopted by Trish Swain, TrailSafe Director, Oct. 8, 2010. TJ can best be described as a nonstop love bug who, thankfully, regained full cat agility and found a job as TrailSafe mascot.