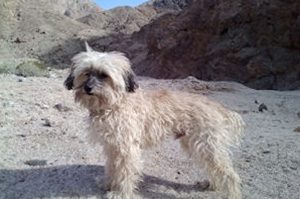 It was December 23, 2013, the first day of what we planned to be a three-week camping trip. I was with my 12-pound poodle, Woodrow, and a friend. We were hiking the Mormon Mountains near Las Vegas to see the petroglyphs. We parked by the wash and hiked about ten feet when I heard Woodrow screaming. His right front paw was in a trap. I tried desperately to free him although he was biting me and there was blood everywhere. I realized much of the blood was mine – from the bites and from my struggles with the trap. I examined the device as calmly as I could and reasoned I was at least as intelligent as whomever set it. So I managed to open it and we took Woodrow to the nearest veterinarian which was in Mesquite. Woodrow couldn’t walk for the first day, but he did recover and we continued our trip. He was nervous and hesitant – whereas he had not been nervous before he got trapped. I called Nevada Dept. of Wildlife (NDOW) and was told sorry, but they couldn’t do anything because the trap was legally set. “Thank you for sharing our story. It was the most horrific and helpless feeling, seeing my little dog writhing and screaming in pain. He was fortunate enough to have me there to release him from the torture, but so many animals don’t have that good fortune. They are instead left to suffer for days until the trapper puts them out of their misery with a shot to the head. I don’t understand how this cruelty is legal in what is touted to be a civilized society.” -Woodrow’s Proud Mom, Sonja Mills Told in person Feb. 22, 2014.